His Excellency Jaak Aaviksoo
Minister of Defense of Estonia 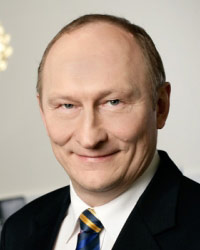 The crucial role of communication in the global security arena has been evoked repeatedly during our deliberations of the past few days and can only continue to grow in importance in the decades ahead. As an introduction to the topic, I would like to take a look at three remarks made during the workshop. First, we learned that defense spending is declining relative to GDP in most NATO member countries, and in a number of other countries as well. Second, a public poll carried out in a major NATO Partnership for Peace country less than a year ago found that over 70% of respondents considered or perceived NATO to be a hostile entity. At the same time, over 80% of respondents did not understand NATO’s purpose or mission. Third, some of the countries in the international alliance, which goes way beyond the 28 NATO countries to encompass 44 nations at present, are showing increasing Afghanistan fatigue, and this poses a great challenge for all of us.

“Winning the hearts and minds” is a high priority for the international community. As you know, the term was coined in reference to the Afghan people. But it is a much broader notion. It encompasses winning the hearts and minds of our colleague ministers, especially those of the ministers of finance in our own governments-of vital importance, as highlighted by the first remark above. It is equally important to win the hearts and minds of our constituencies. As politicians and leaders in our own countries, we have a duty to inform and educate our people and also our soldiers, whose lives are being risked far beyond our borders. I do not think we have been successful. In fact, I do not even think we have paid enough attention to these matters.

One of the reasons is that we have not been able to keep up with the developments of the information society, its networking components, its factual mobilization, and the way it handles truths and beliefs. The realities of the modern world are increasingly virtual. Going back some 30 to 50 years, our frame of reference was limited to what we saw and eyewitnessed. We based perhaps 70% - 90% of our attitudes and our decisions on what we knew from personal experience. Today, this part of knowledge-based decisionmaking is diminishing, and we are increasingly relying on information acquired through communication means. This is only natural since in the modern world, with all of its diversity and all of its challenges, we are called upon to answer hundreds and even thousands of questions in short time periods in both our personal lives and professional capacities. Thus it is to be expected that we would turn to off-the-shelf attitudes, we might even call them stereotypes. But I strongly feel that too many things which I say and do have not been digested by me personally to the extent that I feel comfortable, at least not according to the standards which we were used to in the not-so-distant past.

Strategic communications are much more important than we realize. How good we are at getting our ideas, values, accomplishments, and achievements through to those who need or should receive this information will have a significant impact on their practical decisionmaking and on the formation of their own attitudes with regard to us. How much of our defense spending goes towards strategic communication? Do you think it is proportionate to the importance of getting our ideas through to those we need to reach?

AREAS FOR IMPROVEMENT IN STRATEGIC COMMUNICATIONS

I try to be very practical concerning the example of Afghanistan. The fighting has seen a high number of civilian casualties: This part of the problem has been effectively communicated to the global community. Yet our joint effort with the Afghan government, the U.N., NATO countries and partners, and a number of NGOs has sought to do everything possible to avoid these civilian casualties. This issue is intimately related to the insurgents’ use of human shields to attack locals, the international community, ISAF, and other forces. When we look at the global public’s strong condemnation of the civilian casualties in Afghanistan, for which it largely holds the international alliance responsible, versus the little- publicized underlying problem of human shields being used by the insurgency, it is not hard to see that we are on the losing side in these strategic communications.

Another problem we should address is our political willingness to coin and discuss concepts that are premature, thus launching ideas that start to live their own lives before they are fully formed. One of these is the concept of comprehensive approach. I am sorry that the load of the concept is falling upon the shoulders of NATO and allied soldiers. They are unable to carry that weight; it is the responsibility of politicians to develop a much more mature concept and allocate resources to carry out that concept.

Equally so-and this has been mentioned several times during the past few days-a military solution cannot be a solution. We all know that. But by expressing this too often we entrap ourselves and make ourselves vulnerable; it gives the impression that we are somehow the ones who think this is how we proceed. This is not the case, but nonetheless requires us to defend ourselves against people who criticize us.

When it comes to strategic communications, because of our history and our culture born in Europe during the Reformation, we are theoretical and conceptual people. That is, we try to communicate general values and ideas. Yet when we look at how people behave in modern society, they are not particularly interested in general ideas. Rather, people relate to concrete facts and events, what actually happens, how John feels or Ahmed feels under certain circumstances. They do not care much what happens in the generalized community of all Ahmeds or all Johns or all of the Estonians down in Afghanistan.

We have not been good enough at getting out the practical messages, the true experiences, and the real facts of life to those who are interested in what is going on in that somewhat forgotten part of the world. On the axes of active and reactive communication, we have not done enough to be active. On the axes of hierarchical and network communication, we have been too inclined to adopt the hierarchical approach of having a Chief Information Officer in charge of handling all communications. We also have not been able to respond in due manner to the mood of the global and local communities: They are much more interested in news than facts. I am not saying that we have to give up being factually correct, but we should try to balance the speed and news component with factual accuracy. This is something that our adversaries have been doing much more successfully than we have.

A second dimension of my deliberations concerns the concept of security. In discussing the issue of global security, we have been much more focused on the objective side of security-number of conflicts, level of casualties, balance of power, interests, dominance, winning and losing. I do not think most people around us both back at home or further away in third countries also perceive security as an objective quality. They are much more interested in their own subjective understanding of security, based on their personal perceptions of threats which are much nearer to them than those that we are addressing.

I do not think we need to adjust our attitudes concerning global security, which are as objective as possible, in exchange for a multitude of different personal perceptions of security. No, that is not my intention. But if we want to reach the hearts and minds, if we want to win these people to our side and expect them to understand what we are doing, want to do, and have achieved, we have to find the harmony between their subjective perceptions of what security means to them and what security means to us as professionals in various capacities, whether we be military officers or members of an administration or politicians.

This subjective perception of real threats is a natural phenomenon that sits in human psychology. Throughout history, and especially in the modern era, we must recognize that all threats beyond personal experience can only be communicated through strategic communication. Some governments have done this through methods of indoctrination. In fact, some of our adversaries do this today. I am not inviting you to indoctrinate your constituencies. But let us realize that people do need leadership in order to understand the threats. Otherwise, they focus on the threats that are near them and are inclined to blame us if we fail to address them. This is of course understandable, yet it is something that we need to keep in mind.

Most countries participating here, especially those from the Euro-Atlantic area, are still living in the dream of the post-Cold War era and believe that the evil has been put down and that we are facing a much brighter future. We are all convinced that the 21st Century will be less violent than the 20th Century has been. The First and Second World Wars and the potential threat of an even more disastrous Third World War are hopefully further and further behind us. While I personally think this is true, this does not free us from the need to look at and guard against the violence and insecurity that is still present in the world and that threatens us. It is the responsibility of the developed world, whatever that term may mean, to concern ourselves not only with what is going on in our areas of engagement, be they the western Balkans, Middle East, or Afghanistan, but also in the forgotten or almost forgotten continent of Africa. Real threats take a long time to develop and when they remain for too long unnoticed they can lead to even greater problems, ones that it may be too late to solve when we wake up from the comfort of the present.

I wish for all peoples to live in peace, but unfortunately this is not yet the case today. We need to voice what we are doing to assist the regions that are concerns at present. We need to empower our Afghan friends and to communicate loudly and clearly what is going on in Afghanistan. I have not heard better news in quite a long time–that Afghanistan, for the first time in 30 years, is able to feed its people. This is a sign of progress. Let us share this with all those who want to hear. Let us remain committed to all those peoples who are in need of our help. Let us be able to win the hearts and minds of all peoples, those back at home, those further away in countries that we are assisting, and those throughout the rest of the world.