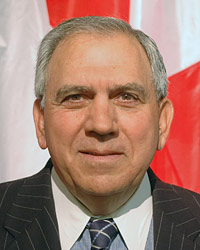 In the past we were concerned about deterring a multi-echelon Soviet attack in the famous Fulda Gap of Germany. We arrayed ships, tanks, and planes to make it difficult for the Soviets to succeed in an offensive move against NATO. Our primary objective was deterrence but we were prepared to fight and win if deterrence failed. And deterrence worked. Fourteen million American GI’s deployed to Europe and joined millions of NATO troops during the 40 years of the Cold War to demonstrate U.S. and NATO resolve. Twenty years ago the Berlin Wall and Iron Curtain were torn down, Germany was reunited, and the Soviet Communist Empire was no more. Victory without firing a shot.

However, the post-Cold War period has been anything but peaceful. Long simmering ethnic and religious strife came into full bloom. Atrocities, tribal warfare, and ethnic cleansing placed millions of innocent men, women, and children at risk. The international community was slow to respond to these new threats and when it did, it lacked the doctrine, force structure, and political will to do so effectively.

A new concept was needed. One that recognized that the goal was not to defeat a large standing army but rather to achieve an end state where a host nation government had the capacity to govern itself, protect its sovereignty, and provide a better life for its citizens.

To provide a framework for the challenges of the 21st Century requires a different strategy. One focused not just on the initial entry or war fight but primarily on the end state. And the end state may require engagement for 5, 10, or 20 years. It will require stabilization or a secure environment within the country to allow interagency and international organizations and non-governmental organizations to build capacity in the government, train security forces, and establish the rule of law. The goal is to go from stabilization to normalization where the country can provide for the security and well-being of its people, protect its sovereignty, and demonstrate and practice the rule of law for all of its people. I have on this panel three highly qualified members of non-governmental organizations and civil agencies. Before they address you, allow me to lay the foundation for further discussion.

Clearly military means alone will not provide the desired end state. The diagram below provides a framework for conducting operations in the post-Cold War period. It requires not just U.S. and multinational military forces, but also interagency and non-governmental organizations. The key is that all three must work together in a common strategy. All three must be involved in the planning for the operations, not piecemeal, committed after the initial war fight. Notice that all three circles intersect one another. We have paid little attention to the third circle-the interagency. Yet for a successful outcome in today’s environment the contributions made by the interagency, international organizations, and non- governmental organizations are essential for success.

We have not managed to successfully factor the third circle (see chart on the following page) into our operational planning. It is not just pulling down a statue in Baghdad to say “victory,” the challenge is much more complicated that that. We have failed to understand what I call the “battle space.” And it requires more than troops!

By the way, I first showed this chart when I was the U.S. commander in Latin America and brought peace to El Salvador in 1992! I used it in Bosnia in 1995, but it was difficult to get nations’ militaries to plan for more than what we did in the Cold War. Nations then said, “We do not do nation building.” I contend it is not nation building but security building.

The key to all of this is understanding that our military needs to create a stable, secure environment for civilian agencies to work in. Someone mentioned earlier today that we do not need the military in there for 15 years. I could not agree more. Look at how much all of the normalization phase involves non-military actors. Given this, why not include all of the organizations involved in the normalization process (the aid agencies, etc.) in the planning? This is especially important if our goal is to reach an end state-as the military officers on the previous panel concurred-and not simply an end date. Why don’t we bring together civil and military planners before we intervene in a region? Why can’t we have simulation exercises before the train wreck occurs? This is how we can create conditions for success.

Once we understand the operational environment and the challenge to go from the war fight to stabilization to normalization, we need to now consider what I call conditions for success. These are:

Nothing is more important than a clear understanding by both military and civilian actors on the mission. As I said, the mission is more than the war fight or initial entry. In Afghanistan, it is creating a stable government capable of protecting its sovereignty and under the rule of law. Therefore, it is more than just the use of military force. It includes numerous civil agencies to provide the basic necessities that make peace possible-energy, shelter, jobs, police, and capacity building in the host nation’s government. We did not get it right initially in Iraq and Afghanistan. We need to do so now! Remember the military can bring about an absence of war but not true peace. To do so requires the infusion of interagency organizations and NGOs to build legitimacy in the host nation government. And that includes verified elections.

There needs to be both unity of command and unity of effort by all involved-military, civilian, and political participants. There has been an absence of unity of command in Afghanistan for over 8 years and we are paying the price. Afghanistan is under the authority of NATO but NATO has been fragmented in its approach to Afghanistan, both militarily and politically. We are better than that as a military and as an alliance. We need to plan for not only the military “surge” but also for civilian implementation. One suggestion is to form a Civilian Military Integrated Staff (CMIS). Information and intelligence would be shared. Trust and confidence would be established.

The most difficult of the conditions for success is timely political decisions. Nations are reluctant to make decisions early, but early guidance allows for proper force generation, training, and planning. During the Bosnian conflict a meeting of the heads of state of countries involved in the conflict was held in Paris on December 14, 1995. It was at this meeting that NATO agreed to send an implementation force into Bosnia to enforce a peace settlement dictated by the Dayton Peace Accords. Afterwards, the Secretary General turned to me and said, “SACEUR, you have your mission.” They wanted, in one week, to deploy 60,000 troops in a winter campaign into the most difficult terrain in Europe-with only one airport and one seaport! Fortunately, I had anticipated a possible deployment to Bosnia and began planning two years earlier. Because of this early planning the NATO force-to include a Russian airborne brigade-was able to deploy and be “set” within 45 days. Therefore timely political decisions are essential for success. By doing so, it is possible to develop the political clarity of the mission and unity of command and unity of effort.

As the world grapples with the current asymmetrical threats to international security, it is imperative that the international community and an alliance such as NATO be proactive in confronting the challenges to civilization as we know it. A realistic, proactive approach to these threats we now face in Iraq and Afghanistan buttressed by structures and procedures that facilitate achieving the desired end state are essential for success. To do so will require inclusion of all elements-joint, multinational and interagency, and civil organizations-in the planning and execution of the strategy.