Security in the Balkans-A Montenegrin Perspective

His Excellency Boro Vučinić
Minister of Defense of Montenegro 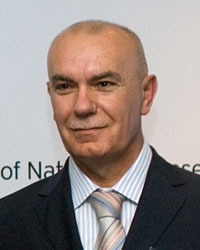 I would like to thank the 26th International Workshop on Global Security and the Minister of Defense of the Republic of Turkey for my invitation here. It is a great honor and a privilege to have an opportunity at such a high-level gathering to present the perspective of a small country, one that became independent in 2006 after almost 90 years of existence.

It is also a special pleasure for me to speak in a country that, in the late 19th Century, was the first with which Montenegro, after being internationally recognized at the Berlin Congress, established diplomatic relations. As far as historic importance is concerned, Istanbul is the right place to talk about the issues of global security.

THE NEED FOR INTEGRATED SECURITY

When we talk about global security today, we have to state that the dynamics of modern international relations stipulate different approaches for solving emerging problems. First of all, developing cooperation between states in all fields is an important prerequisite for global security. In the 21st Century, it is almost unimaginable to be able to resolve security issues only through military means. The strategies that used to yield results and that successfully challenged security issues are less and less efficient today. It is clear that the current national security concept obtains its full meaning only in the broader framework of security integration.

The region to which Montenegro belongs particularly experienced these changes in the late 20th Century. Even though our country is much more stable today, we think that NATO’s presence is very important for the permanent stabilization of the Western Balkans. In line with the security changes that have taken place lately, NATO transformed itself from a clearly military alliance to an organization with a very strong political aspect. The fact that NATO recently celebrated the 60th anniversary of its existence is the best indicator of the adjustments it has made to the new conditions. Other indicators include the NATO expansion process and the fact that almost all the countries of Eastern Europe have expressed their readiness to meet the criteria necessary for full-fledged membership in NATO. A large number of them have already met these criteria.

After regaining its independence, Montenegro defined its membership in NATO and the EU as a foreign policy priority. Since that time, Montenegro has achieved great economic growth. The 2008 state budget always had a surplus, and for a short period of time we have been one of the fastest-growing tourist economies in the world. Such a robust trend of positive changes and integration processes has involved the security sector. Immediately after we regained our statehood, we received an invitation to the Partnership for Peace program. Since then, we have worked intensively on defense system reform and building a new army. As an affirmation of the progress we have made we received an invitation from the Bucharest Summit to begin an Intensified Dialogue. At the Strasbourg / Kehl Summit, Montenegro’s progress in its foreign processes was clearly recognized, which opened the way for us to meet at some of the upcoming regular sessions of the North Atlantic Council at the ambassador level.

The best indicator of what we have done in a short time regarding the building of our ministry and army is the fact that, besides a large number of obligations we successfully met, we submitted our country as a candidate to host the Cooperative Marlin 2010 exercise. We also submitted our country as a candidate to host the MEDCUR 2010 exercise in cooperation with EUCOM. At the time of this workshop, one of our most important activities is preparing our army personnel to participate in peacekeeping missions. Montenegro is determined, in line with its capacities, to contribute to keeping peace and stability in crisis regions. We have been working intensively on preparing a three-member medical team and one platoon to participate in the ISAF mission, and we plan to deploy them by the end of 2009.

Even though we are a small country, Montenegro plays an important role in enabling peace and stability in the Western Balkans. I think we also can benefit the most from stability in the region. When it comes to regional cooperation, Montenegro’s center for training helicopter pilots was nominated to become a regional center because of its remarkably favorable and unique geographic and climatic conditions.

We are convinced that the Western Balkan states, in line with their individual agreements regarding reform processes and their expressed desire to join the Euro-Atlantic community, will have an open path to full-fledged membership in NATO. Since there are still some unresolved issues and since the past has been full of conflict, the memory of which is still fresh in the minds of these states’ citizens, only complete integration in a stable structure such as NATO is the best guarantee of permanent stability and prosperity. With such a vision, Montenegro is stepping into the future.