The Future of Our Armed Forces

His Excellency Eimert van Middelkoop
Minister of Defense of the Netherlands 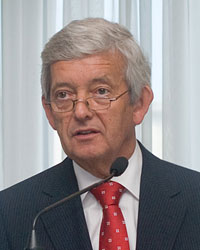 In a volatile world in which disruptive conflicts cannot be ignored, the demands placed upon our armed forces will likely remain high. In the last two decades the number of missions aimed at the stabilization and reconstruction of failed states has increased markedly, and it does not seem likely that this will change in the near future.

This development stems largely from a broad consensus that failed and fragile states are a threat to security. Fighting poverty and improving governance worldwide is therefore of direct national interest to us all. As Kofi Annan pointed out, unless we assume our responsibility toward fragile states the world cannot enjoy peace and prosperity. Continued involvement in these states will be necessary in many respects. But prolonged involvement does not imply continued warfare.

We must be ready and able to intervene when necessary, but intervention alone is often not enough. Stabilization and reconstruction are just as important and can pose even greater challenges. We therefore must also invest in conflict prevention and reconstruction. We need our armed forces to stabilize failed states, but also to build and strengthen security institutions. Investing in security sector reform will therefore help to prevent conflicts as well as to end them. In short, to be effective we need the integrated deployment of all resources at our disposal.

THE ARMED FORCES OF THE NETHERLANDS

As one of the first NATO Allies, the Netherlands initiated a fundamental change in the direction of its armed forces in the early 1990s. Since then, our armed forces have been transformed from an organization with a massive and static defensive posture into a modern and well-equipped organization with extensive expeditionary capabilities. The fact that, as a relatively small nation, we can act as lead nation in Uruzgan for an extended period of time is testimony to the success of this transformation.

But there is no time to rest on our laurels. The world is changing and so is the role of the armed forces. We must continuously adapt our forces to changing circumstances and new technology. We are currently working on a future policy survey, which in early 2010 will present policy options for the future of the Dutch Armed Forces. Our approach, involving all relevant ministries, allows us to develop a vision that is built upon the knowledge and expertise of all those involved in issues related to security and the rule of law.

Flexibility. In a world in which conflicts come in many shapes and sizes, I think that the central tenet for structuring our armed forces is flexibility. We must be able to adapt quickly to new threats and be able to implement new technology or tactics as they develop. Afghanistan has proven that the armed forces are able to adapt quickly if the circumstances demand it. To give you an example, The Netherlands bought 48 Bushmaster armoured vehicles in three years. Normally, the acquisition and subsequent introduction in the field of an important vehicle takes about a decade. Fast-track approaches have enabled us to incorporate the Bushmaster in the ongoing operations in Uruzgan, and those vehicles substantially improve the safety of our military men and women there. Quicker procedures are essential if we are to adapt quickly to new and rapidly changing areas of operations.

Innovation. Another vital aspect is innovation. The role of technology in warfare is still growing fast. Cyberwarfare and robotics will change the face of battle, although exactly how remains unclear. The way we use our forces is increasingly determined by technological capabilities. These can be complex and expensive but also simple and inexpensive. The success of the Predator UAV is a perfect example of this. The number of UAVs used by U.S. forces has risen from only a handful in 2003 to around 7,000 at the time of this workshop.

However, our opponents are also learning fast. They are likely to develop low-cost capabilities for increasing technological ingenuity. For instance, insurgents have already used UAVs—their most important assets are their flexibility and ingenuity. They will avoid engaging us openly and directly but focus instead on exploiting our weak points. They adapt and so must we!

The forces of NATO Allies have shown great ingenuity in combating insurgents around the world as well as closer to home. Soldiers on the ground and commanding officers also have quickly developed effective strategies to fight insurgents in urban areas. In Uruzgan, our own troops have proven their ingenuity, especially in countering improvised explosive devices. We have come a long way, but still every incident reminds us of our vulnerability.

Our increasing use of technology can be both an advantage and a liability. Technology has enabled us to save the lives of many soldiers and increase our effectiveness against adversaries. But if our technology fails or is bypassed by an adversary, we become increasingly vulnerable. We need to be aware of this and develop strategies to reduce this vulnerability.

The way in which we deploy our forces will demand ever-increasing cooperation and coordination with other actors. Military operations alone will not bring lasting stability. If government structures are weak or nonexistent and crime is rampant, military successes will be short-lived. This is the essence of the comprehensive approach. We must aim to improve governance, build an army, create a national police organization, and develop the judicial system. Success can only be attained if we achieve tangible results in all of these areas.

This long-term commitment to stabilize and rebuild failed states makes the role soldiers will play more diverse and demanding. The soldier of the future will still be a warrior, but it is clear that more often he or she will be expected to perform other tasks as well. Civil-military cooperation is a term much in use these days and is not an empty phrase. In Afghanistan, the Provincial Reconstruction Teams are essential in order to initiate a reconstruction and development effort and our security sector reform efforts in Africa are aimed at conflict prevention.

NATO is still at the heart of our security strategy. Collective security is still our common goal. In April 2008, in Strasbourg, the heads of state and government decided to review NATO’s Strategic Concept before the next summit in Lisbon. In doing so, it is of vital importance that we avoid the trap of once again setting ambitious goals and finding out later that we are unable to afford them. This would be extremely damaging to NATO’s public image and credibility.

In order to ensure that we create a realistic strategic concept and level of ambition, I believe the concept should contain a chapter that brings our ambitions in line with our financial capabilities right from the start. This financial chapter should also address the currently unbalanced budget distribution within NATO and the way we finance our operations. Our current method is ineffective, inefficient, and bound to fail sooner or later. Therefore I deliberately put this topic on the agenda of the recent July 2008 meeting of ministers of defense in Brussels. An organization that spends almost half of its annual budget on infrastructure projects and its headquarters cannot call itself fit to face the challenges of the future. I understand that there are national interests at stake here, just as in my own country. But these fundamental problems will not solve themselves if we disregard them and let national interests prevail.

Important as it may be to develop long-term solutions, they should not keep us from prioritizing our current budget as well. The current financial and economic circumstances make it even more important for us to spend our budget prudently and to spend it on our highest priorities. It is essential for the future of the Alliance, but it is also a responsibility we have toward the people we represent.

In conclusion, we need flexible and well-equipped forces that are able to operate under many different circumstances and to perform a variety of tasks. In the interest of our national security we need to be able to act in fragile or failed states but also address potential conventional threats that may develop in the coming decades. To do all of these things simultaneously we need to be as cost-effective as possible.