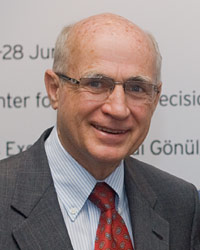 Turkish Defense Minister Vecdi Gönül’s Patronage of the 26th International Workshop. At the invitation of Turkish Defense Minister Vecdi Gönül, this year’s 26th International Workshop on Global Security took place in Istanbul, Turkey on 25-28 June 2009. We are deeply grateful for Minister Gönül’s outstanding support of the workshop in his role as patron and key opening speaker. Minister Gönül first attended the workshop series in Berlin, Germany in 2004 and we would like to warmly thank him for his numerous contributions since then.

Çırağan Palace. Defense Minister Gönül hosted a workshop opening reception and dinner on 25 June at the Çırağan Palace, a beautiful Ottoman imperial palace on the shores of the Bosphorus which also briefly served as the site of the Turkish Parliament. A special performance of the Mehter military marching band, whose origins date back to the 13th Century, rounded out the evening.

Istanbul Strait Boat Cruise and Archaeological Museum at Topkapi Palace. On the evening of 26 June, workshop participants enjoyed a reception and dinner held aboard a boat cruising the Bosphorus strait, which separates the European and Asian parts of Istanbul, while on 27 June a closing reception and dinner took place at the Archaeological Museum in Topkapi Palace. It also included a private visit of the museum’s extensive collections of Turkish, Hellenistic, and Roman artifacts. Some of the museum’s most famous pieces include the Alexander Sarcophagus, adorned with carvings of Alexander the Great, and the Treaty of Kadesh, the world’s oldest peace treaty which was signed in 1258 BC between the Egyptian Pharaoh Ramses II and the Hittite King Hattusilis III.

Museum of Turkish and Islamic Art, Post-Workshop Events, and Ceylan Intercontinental Hotel. For early arriving participants, there was a reception and private visit on 24 June at the Museum of Turkish and Islamic Art, which is housed in the former palace of Ibrahim Pasha, the Grand Vizir of Sultan Suleyman the Magnificent, and directly overlooks the Blue Mosque and ancient Roman hippodrome. The museum possesses an important collection of ancient carpets, tiles, and calligraphy. Those staying on after the workshop were able to take advantage of a post-workshop visit on 28 June to Topkapi Palace, the primary residence of the Ottoman sultans from 1465-1856. Its collections include the famous Topkapi dagger and Spoonmaker’s Diamond as well as the cloak and sword of the prophet Mohammed. Finally, we would like to thank the Ceylan Intercontinental Hotel, where all of the workshop sessions took place, for their excellent assistance.

We would like to gratefully acknowledge the principal sponsors of the 26th International Workshop:

Turkish Defense Ministry Organizing Committee. The contributions of the Turkish Defense Ministry, which not only provided financial support but also allocated a large team to work on the logistical arrangements, were tremendous. We would like to especially thank Rear Admiral Nadir Hakan Eraydin, Chief of Plans and Policy, who was the point of contact for our collaboration. In addition, Colonel Muhterem Karatas and Colonel Oktay Şenyiğit played major roles in the organization, and Major Soydan Görgülü also put in long hours in the months leading up to the conference to arrange many of the practical details.

Under Secretary of Defense (Acquisition, Technology, and Logistics). Alfred Volkman, Director for International Cooperation in the Office of the Under Secretary of Defense for AT&L, has been a sponsor of the workshop for close to 10 years now as well as a key advisor. He chaired an outstanding panel on promoting international cooperation in Afghanistan this year. We also appreciate the many efforts of Roger Golden, Colonel Mark Price, and Rita Bidlack in support of the workshop over the years.

Office of the Director of Net Assessment. Andrew Marshall, Director of Net Assessment in the Office of the Secretary of Defense, has sponsored the workshop series from the time it was first founded 26 years ago. We are extremely grateful for his many years of loyal support, as well as for the important advisory role which he has played in the evolution of the workshop series. In addition, Rebecca Bash has overseen the administration of the project for many years and we are delighted that she was able to attend the workshop again this year for the second time.

Defense Threat Reduction Agency. DTRA has been a sponsor of the workshop for some 25 years, dating back to the time when they were known as the Defense Nuclear Agency. Major General Randy E. Manner, Deputy Director of the agency, gave us valuable support and planning advice. We also appreciate the hard work of Colonel Bob Dickey, Senior Strategic Planner-Operations Enterprise, who has coordinated DTRA’s participation as well as attended the workshop for many years now.

Northrop Grumman. Northrop Grumman was a principal sponsor for the sixth time this year and has been a sponsor for some 15 years in all. We appreciate the participation of Northrop Grumman executives William Ennis, Director, International Business Development; James Heath, President, Electronic Systems International; Timothy Shephard, Vice President, Europe, NATO, Israel & the Americas, ESI, as well as their advice. They also played a major role in developing an excellent panel on NATO transformation and in expanding the number of senior military participants.

Lockheed Martin Corporation. We would also like to thank Lockheed Martin for its many years of sponsorship. Dr. Scott Harris, President, Continental Europe, has been a long-term contributor to the workshop, both as a speaker and as a participant. We appreciate his excellent presentation dicussing defense industry perspectives on technology and consolidation this year.

European Aeronautic Defence and Space Company. EADS has been a supporter of the workshop for many years. Thomas Homberg, Corporate Vice President, Head of Strategic Coordination; Dr. Holger Mey, Vice President, Defense & Security Systems; and Admiral Jean Betermier, Senior Advisor to the CEO, were all able to attend again this year. We appreciate their advice in the workshop planning process, and would also like to thank Dr. Stefan Zoller for his long interest and support.

Cisco. We are very happy that Cisco was able to become a sponsor of the workshop for the first time this year. The company was represented by Terrence C. Morgan, who is Director, Net-Centric Strategies of the Global Government Solutions Group at Cisco as well as Chairman of the Executive Council of the Network Centric Operations Industry Consortium.

Thales. Thales has also been a long-term supporter. We would like to thank Edgar Buckley, Senior Vice President, for his workshop address and participation. He is also a former NATO Assistant Secretary General and is therefore able to bring both political and business perspectives to the discussions.

MITRE Corporation. We would like to thank MITRE for its sponsorship of the workshop over the past two decades. Raymond Haller, Senior Vice President, C2C, has attended for a number of years now, and we also appreciate the participation of Cynthia Sturm, Head of European Operations, this year.

General Dynamics. We are grateful for the continued sponsorship and participation of General Dynamics, which was represented once again by William Schmieder, Vice President, International Business Development, and General George Joulwan, former Supreme Allied Commander Europe. While at NATO, General Joulwan served as the Honorary General Chairman of the workshop from 1994-1997 and has remained a pillar of the conference since then.

Workshop Patrons, Honorary Chairmen, and Keynote Speakers. We greatly appreciate the support of our past and present workshop patrons and general chairmen:

Advisory Board. Our Board of Advisors, which has provided excellent input in helping to develop the workshop agenda over the years, includes:

Contributors of the 26th International Workshop. The workshop brought together contributors from some 30 countries and organizations, including representatives from the U.N., NATO, EU, and Mediterranean Dialogue:

Workshop International Staff. The Center for Strategic Decision Research (CSDR) workshop staff included Dr. Ania Garlitski, M.D., a cardiologist and Assistant Professor at Tufts-New England Medical Center, who started working with us more than 10 years ago when she was a student at Stanford and was responsible for coordinating many of the evening social events; Grace Wong, another Stanford graduate now working for CNN, who handled the greeting of VIPs; and Pinar Atayol, a graduate of Galatasaray University in Istanbul, who was in charge of negotiations with suppliers. Jean Lee, a graphic designer who also started working with CSDR soon after her Stanford graduation, was responsible for all of the workshop’s printing, graphics, and photography, including the cover design of this book. We also appreciate the dedicated work of Eugene Whitlock, J.D., a graduate of Stanford University and University of Michigan Law School, who was in charge of billing and contributed several photos in these proceedings. Caroline Baylon, an economics graduate of Stanford University, was the overall director of the workshop staff. Caroline has led the staff for the last five years and has contributed as a staff member for more than 13 years. CSDR Co-Director Anne D. Baylon, a graduate of the University of Paris Law School and a Master degree graduate of Stanford University, oversaw the coordination of the workshop as a whole.

Workshop Publications. Anne was also responsible for the editing of these Proceedings. As Head of Publications, Anne coordinated the editing process and the obtaining of publication approvals with the chapter authors. She gratefully acknowledges the assistance and contributions of Carol Whiteley and Caroline Baylon, who transcribed and copy edited a number of the chapters.