Security Challenges in the Western Balkans

Her Excellency Dr. Ljubica Jelusic
Minister of Defense of Slovenia 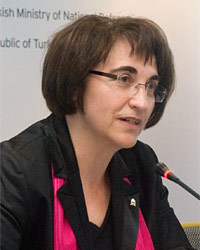 I would like to turn our attention to the situation in the Western Balkans. Although all of us in the international community agree that our main priority is to solve the security challenges in Afghanistan, I would like to stress that the international concerns in the Western Balkans are not yet resolved. Losing interest in the Balkans in the past has proved disastrous for the stability of the region. It happened at the beginning of 1990 and in 1991 when the international community was not very aware of what was going on in the Balkans. There were big changes happening there, but the attention of the international community was diverted elsewhere at that time. Some larger issues were taking place in the eastern part of Europe and we in the Balkans felt that we were slightly forgotten. While being overlooked in the shadow of bigger events, war began. The disintegration of Yugoslavia came about, and we are still suffering the effects of the upheaval. In the Western Balkans, especially in countries that were formed out of the former Yugoslavia, we still cannot say that we enjoy full security.

The war in Yugoslavia clearly demonstrated that the uncontrolled security challenges and instability in the Western Balkans have an important impact on European security and on the security of Slovenia as well. Despite being a country in the region, I must say that sometimes in the past Slovenia has tried to deny that it belongs to this area. Now, however, we are fully aware that our security is influenced by the security of the Western Balkans. This is why we are so in favor of the efforts currently underway in the Balkans that are pushing the region towards Euro-Atlantic integration. I would say that these integration moves are giving the populations in our part of the world a feeling of peace, stability, democracy, and of being among civilized nations. If anything, the new Strategic Concept must count on the aspirations of all countries in the Western Balkans to become NATO members. Currently we have Slovenia, Croatia, and Albania within NATO, we have Macedonia in a halfway position, and we have Montenegro which is fully engaged in trying to become a NATO member. In comparison to Afghanistan-where after eight years of armed conflicts and post-conflict reconstruction, we as an international community are still searching for a new Strategic Concept which could also be called an exit strategy-the current situation in the Western Balkans is much more optimistic.

SOURCES OF INSTABILITY IN THE BALKANS

The second source of instability is Kosovo. It has now been ten years since the implementation of U.N. Security Council Resolution 1244 which deployed NATO peacekeeping forces in Kosovo. When the international community first entered Kosovo in 1999, it actually used a new approach termed a “comprehensive political-military approach.” I cannot say this was a comprehensive approach as we understand it today; when we are talking about Afghanistan today, we also think about the economic aspects of the comprehensive setting. But we did have different international military and political organizations that all pursued their own jobs within Kosovo. The United Nations, NATO, the European Union, and the OSCE each worked in parallel on a different aspect of security: Each organization had its own role. Each organization has also evolved and changed during the course of the past ten years. Indeed, over time the international community has transformed its presence into a new model of presence. The most recent example is NATO, which is transforming the KFOR operation into a so-called “deterrence presence” next year.

OUTCOMES OF THE INTERNATIONAL EFFORT IN KOSOVO

What are the results of our international presence in Kosovo? The security situation is better, the economy is improving, and Kosovo declared independence. It has received some 50 recognitions from different countries around the world. In addition, the educational infrastructure for young people has been established in secondary schools and also at the university level.

But what are the setbacks? First of all, there are problems with respect to the rule of law on the side of the government and also on the side of the population. There have also been failures in creating job opportunities. Earlier today, we talked about problems of poverty and lack of jobs in the context of the Middle East: The situation in Kosovo is very similar. Although the establishment of the educational infrastructure in Kosovo is undoubtedly a positive step, I do fear that this may actually be a prolongation of the inability to provide people with enough jobs, especially in regard to young people. Again, you will find the same demographic trend: The majority of people in Kosovo are young people, and the majority of young people are without jobs. Many of them are now in schools and at universities, both private and government-let. But in the future when they finish their studies, they may again find themselves without the possibility of getting a proper job.

The second issue which is important in Kosovo is that we did not as an international community help to improve the educational level of the female portion of the young population. We know that women are very successful at finishing primary school and primary education. Unfortunately, it is still too risky for them to travel to far distant secondary schools and to universities. So no matter how clever they are, they end up staying at home. If we want to have the whole population democratized and educated in the new values, we also have to do something for the young female population.

If I can say a few words about Slovenian efforts to introduce a kind of comprehensive approach on our micro-level within Kosovo: We are trying to assist Kosovo by providing military, police, and development aid, along with different civilian experts who are able to implement projects to help people use this development aid. We are rotating now on a sustainable basis approximately 400 military troops, we are contributing 15 policemen to the European Union Rule of Law Mission in Kosovo (EULEX), and we were contributing policemen to the United Nations Interim Administration Mission in Kosovo (UNMIK). We are also contributing experts to NATO training teams for the Kosovo Security Forces (KSF) because we believe that the country must be able to provide its own security forces. It must be able to protect itself. This means that it is important for us to build up KSF as a new force, of course shaped according to the modern standards of a security force. (I would not say “military” because KSF is not meant to become a military force.)

We are also deploying a large Civil-Military Cooperation (CIMIC) group which consists of military and civilian experts. They are now executing projects all over Kosovo, especially at Multinational Task Force West in the western part of the country, which is where Slovenian military troops are engaged. These CIMIC teams are very important for winning hearts and minds. It is also paramount to have such teams dialogue with the local population regarding what our standpoints are concerning their security, their situation, and their future.

I will conclude with my vision of the future of Kosovo. Lasting peace in Kosovo is possible, but the economic situation must improve in order for this to happen. We as an international community should help to improve the economic situation and we should also help to establish the rule of law and the rule of tax-paying, which is not yet introduced in Kosovo -or at least not fully. Lasting peace is also possible if young people are given more job opportunities and-as I have already said and will repeat again-if the government is able to respect the rule of law.