Strategies for Dealing with Regions in Crisis:
Israel, Palestine, and the Middle East

Ambassador Dr. Ahmad Masa’deh
Ambassador of Jordan to Belgium and the European Union 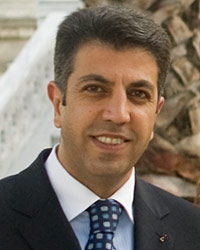 My presentation, which tackles the Middle East crisis, departs from conventional notions that are often used to address this issue and presents a more contemporary approach. This approach is based on the relationship and interaction between economic prosperity and security on the one hand and poverty and radicalization on the other. I believe this approach is crucial to finding a solution to the issues of the Middle East.

Border crossing challenges are leaving their mark on global security in today’s world. Terrorism remains one of the top challenges in this context, as are regional conflicts, the proliferation of weapons of mass destruction, failed states, organized crime, energy, degradation of the environment, migration, world food security, securing sustainable and social development, economic growth, and maintaining successful intercultural dialogue at the grass-roots level. These challenges continue to compel states and international bodies to enhance their cooperation in a bid to collectively brave such perils. As one examines these challenges, the link between security and economic growth becomes ever more evident.

Most recently, however, the credit crunch and the global economic crisis have come to the top of the list. In the Arab world, the effects of the global financial crisis have manifested themselves in a divergent manner on countries’ economies, depending on each country’s economic structure and the extent of its openness to the American economy.

The economic debacle has underscored the inevitability of coming up with a new economic world order, one that is built upon more solid and sustainable foundations and that takes the developmental factor into consideration. Any formulation for such a new financial and economic international regime must take two things into account: (1) more accountability and adherence to the notion of good corporate citizenship, and (2) implementation of a developmental factor that includes the needs and situations of developing countries and markets.

The situation in the Middle East clearly demonstrates how radicalization is close to poverty and thus how security and economic growth are interlinked. If poverty is not tackled in an exemplary manner, radicalization will always occur. This is why the developmental factor is of utmost importance. Cooperation between the north and the south to create a more stable and hospitable economic environment in the south will gradually eradicate milieus where radicalization and desperation breed.

THE CORE ISSUE: THE PALESTINIAN-ISRAELI CONFLICT

Security in the Mediterranean and in the world at large hinges on resolving the core issue of the region: the Israeli-Palestinian conflict. Without resolving this conflict, it will not be possible to address the region’s other problems and associated crises. Turmoil and instability will continue to be the hallmark of the Middle East.

However, Middle Eastern peace, security, and stability will only be realized by reaching a negotiated solution that leads to the establishment of the Palestinian state and addresses Israel’s security concerns. Otherwise the conflict will continue to be exploited and to fuel extremism that spills over to countries in the Middle East and Europe. If the peace process does not move forward, extremism and radicalization will continue to advance, at the expense of proponents of peace, dialogue, cooperation, moderation, and cohesion.

President Obama’s position regarding the Middle East, especially his speech in Cairo, created a positive atmosphere after a long period of pessimism and standstill in the region. This is expected to pave the way for a comprehensive and lasting solution to the Palestinian-Israeli conflict. But to reach this place, it is paramount for all stakeholders to play a positive role by immediately kick-starting serious negotiations based on a clear action plan to realize the two-state solution within a regional context and in accordance with the relevant terms of reference and the Arab peace initiative. Time is of the essence, and the region cannot afford to waste any more.

In addition to the traditional political terms of reference previously mentioned, we should not lose sight of the economic factor. The Palestinian-Israeli conflict illustrates once again how security and economic growth are interlinked—you cannot have one without the other, and one does not lead the other. Military means have always failed to uproot extremism. The economic and social factors and other root causes of this abhorrent phenomenon need to be addressed properly in order to fully eradicate extremism and its manifestations. Afghanistan can teach us many lessons in this context. We must apply a wider notion of security, one that moves from hard security to soft security, and which comprises economic and cultural means in addition to traditional security activities.

This must be done through a just peace agreement for the Palestinians-one that promises true independence embodied in a sovereign, contiguous state capable of fruitful economic life and secure sustainable national development. For the Israelis, such an agreement would provide true security and normalization with 57 Muslim countries, which in turn would bring an end to the conflict and establish relationships of respect and cooperation across the region.

In this context, we need to move from the theoretical notion of security in the Middle East to security that has practical tools. On the ground this means Israel taking tangible and serious steps to improve the living standards and economic conditions of the Palestinian people, in addition to removing obstacles that hinder progress in the peace process. The foremost of these obstacles are settlement activities in the West Bank, unilateral procedures in Jerusalem, and the economic blockade and other violations against the Palestinians.

Israel must have a vision for peace and an answer to the question of what will be the fate of the five million Palestinians and five million Jews who currently live between the river and the sea. Visible progress on the ground has yet to materialize. Palestinians must experience an improvement in their daily lives and economic conditions and Israel must enable the Palestinian economy to recover.

THE UNION FOR THE MEDITERRANEAN

Another example of a wider security initiative is the Union for the Mediterranean, which is a very ambitious, multilateral forum that can enable true soft security and serve as further proof that economic and social factors can become more instrumental. The Union strives to support the economic welfare of people on both rims of the Mediterranean, taking on all of the above-mentioned problems including physical security and regional stability. It should play an important role in addressing the common challenges facing Euro-Mediterranean partners.

The political realities of the Middle East continue to reflect negatively on its security and its social, economic, and business environments. Bringing about peace will create a more conducive life for the peoples of the region. This in turn will have a positive effect on Europe and the world at large. Once prosperous economic conditions and a stable political environment prevail, security will be a natural result.