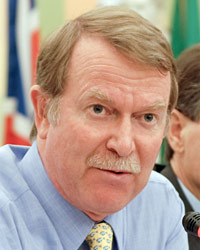 I thought I would say a few words about a very big item on the NATO agenda this year: the new Strategic Concept. As you know, the Strategic Concept is in essence NATO’s mission statement, or, in military speak, its strategic directive. The present Strategic Concept was agreed to in 1999. The great majority of it remains valid, and highly relevant. But some of its aspects, in particular, NATO’s approach to new threats and challenges such as cyberattacks and energy security and how it should relate to other international organizations (the Comprehensive Approach), manifestly need updating. There is also an increasing feeling, which came through quite strongly at the Strasbourg / Kehl Summit, that more work is necessary to explain to Allied publics—indeed to the wider world—what NATO is and what it does. Too many people still think in terms of Cold War stereotypes. A new Strategic Concept, written in the right way, would be an excellent way of doing that.

At Strasbourg, heads of state and government adopted a declaration on Alliance security, which can essentially be seen as the foreword to the new Strategic Concept. It is only one page and a half long, and I hope you will read it. Unlike many NATO documents, it was not drafted line by line, but rather through a process of iterative discussion between the Secretary General and ambassadors. It contains some important points:

The declaration concludes by tasking the Secretary General with developing a new Strategic Concept and submitting proposals for its implementation and approval at the 2010 Summit in Lisbon. The Heads of state and government asked him to convene and lead a broad-based group of experts to help him do this, and to keep the Council in permanent session involved throughout the process. The Heads drafted this language themselves with the aim of avoiding a lowest-common- denominator approach to the Strategic Concept and to producing a document that will make a real difference.

Work on the new Strategic Concept will have to cover some important and fundamental issues. I will not go into them all now, but I will just give a flavor of what I think will be some of the key points. These include:

All of that will, in all honesty, give us more than enough to go with.