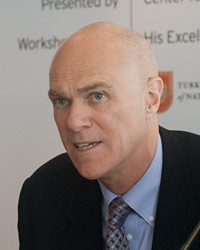 I would like to address the new Strategic Concept from a few standpoints. The 1999 Strategic Concept is actually not a bad document. It is fairly forward-looking and much of it is still relevant. But the principal difference-as I think everyone recognizes-is the September 11th, attacks which have occurred in the meantime. The significance of September 11th, and the declaration by NATO of Article 5, was that international terrorism constituted and was seen as a strategic threat to the Alliance for the first time, despite the fact that terrorism had been endemic to many of our societies for a very long time indeed.

I think that the nature of this threat-of international terrorism-has led to a number of considerations which will be reflected in the new Strategic Concept which we are about to begin negotiating. The first consideration is the enduring role of collective defense and the transatlantic link. Second, threats are now seen as emerging well beyond the immediate territory of the Alliance and an expeditionary capacity is required to meet them. Third, we have learned that we need to be flexible in the way in which we address these threats. Military force is often necessary but clearly not sufficient, and the diplomatic capacity of the Alliance I think if anything will be given greater weight in the new Strategic Concept. Fourth, we have learned through experience that NATO has to work with others to achieve its objectives.

IMPLICATIONS OF AFGHANISTAN FOR THE NEW STRATEGIC CONCEPT

Based on these broad considerations, I would like to identify some of the lessons of Afghanistan for the new Strategic Concept. I think the most important issue is the comprehensive approach. There is no solution that can rely solely on military force for Afghanistan, and NATO cannot work in isolation. We learned this lesson in the Balkans. Perhaps not sufficiently well, however, because it took some time to flesh out a similar approach with Afghanistan, though in a much different context.

Second, future expeditionary missions need to begin with a comprehensive approach at the front end. This approach needs to lay out the roles of the various actors going in, whether it be the U.N., NATO, EU, or others. We are in a sense creating this as we go along, as you have seen through the various strategies that have been proposed along the way. NATO requires better docking mechanisms to civilian component contributors.

Third, building indigenous security capacity is something we began doing in the Balkans and we are doing in a major way in Afghanistan. This has included the training of both indigenous armed forces and police. We should have begun doing this from the onset in Afghanistan. We are doing it well now, however. As you all know, the ISAF Operational Mentoring and Liaison Teams (OMLTs) have been a creative and decisive means of extending this training. The NATO Training Mission Afghanistan (NTM-A) institutionalizes this approach in a cross-theatre aspect. But one of the questions we will have to consider in the debate over the new Strategic Concept is whether we need a standing command in NATO, a new command, devoted to the training of indigenous forces now and in future missions. This is an important issue to address.

Finally, we need to consider the principles of Allied solidarity and strategic unity. The use of restrictive geographic and operational caveats hampers military effectiveness. This cannot be overlooked in light of the corrosive effect caveats have had on Allied solidarity. We need to ensure that in future operations we take measures which avoid turning NATO into a “two tiered” alliance, which would be very negative from our perspective. Once a mission is agreed, the obligations which flow from it need to be fully and equitably implemented by all.

To conclude, the new Strategic Concept could help us avoid such a scenario by drawing closer links between collective defense, as reflected in Article 5, and the expeditionary capacity needed to meet emerging threats at strategic distance.