Dealing with Crises in Afghanistan and Pakistan 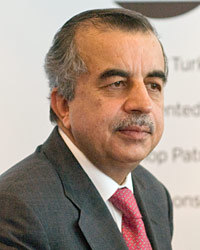 It is an honor to have the opportunity to speak to you today. This is a key time for the world in both Afghanistan and the surrounding region. In the last few months, international attention has refocused. New U.S. leadership has promised more troops and a civilian surge. In a short time, Afghans will go to the polls and choose our next leaders. Despite the continuing security and political challenges, this new focus has already generated several steps in the right direction: A civilian surge, attention on sub-national governance, and a new international alignment with Afghan priorities.

The stakes for success in Afghanistan are high. This is NATO’s first peacekeeping mission outside Europe in its 60-year history. Some have suggested that Afghanistan represents a definitive measure of NATO’s ongoing transformation and resolve as well as a true test of NATO’s future. In addition, a failure of international engagement would be a serious triumph for terrorism. As the world saw eight years ago, an unstable Afghan state can foster terrorists. Conversely, a successful Afghan state offers security for its neighbors and allies and can act as an economic hub and land bridge.

The time is right. The stakes are high. So today our discussion about how to achieve success in Afghanistan is crucial.

I have been asked to speak about the political and diplomatic perspectives on a strategy for success. Speaking to an audience of mostly defense specialists and representatives, my goal today is to lay out the correct civilian and political strategy to complement our military understanding.

THE NEED FOR A COMPLEMENTARY CIVILIAN-MILITARY STRATEGY

At a time of economic uncertainty, a civilian strategy and a military strategy need to be complementary. The United States has recognized this. As President Obama stated, “It is far cheaper to train a policeman to secure their village or to help a farmer seed a crop than it is to send [U.S.] troops to fight tour after tour of duty.” We also understand that no victory in Afghanistan can be purely military. Only a comprehensive political-military solution is sustainable and lasting.

The modernization of our country did not begin in 2001—it began in the early 1900s. In 1923, our first constitution enforced such laws as compulsory elementary education. In the 1960s, women voted and served in political offices alongside men. There was freedom of movement and security of property. The state enforced a legitimate control that extended throughout the country before external powers interfered and violence unsettled our progress. In short, there has been a central state in Afghanistan; there can be one again.

The Taliban seeks to persuade the world, and Afghans themselves, that their movement is only “returning” Afghanistan to its traditional morality. But their barbarity does not represent any Afghan tradition. In fact, the Taliban is exactly the opposite-they are an anti-tradition and an anti-culture. They are a product of war and destruction, capable of producing only further destruction.

So we must ensure that our comprehensive political-military strategy is not stymied by wrong assumptions. A better political understanding of Afghan culture and history opens up new beliefs in our opportunity for success. Similarly, a better political understanding of the enemy opens up new possibilities for their defeat. This enemy is comprised of Al-Qaeda, the Taliban, and their international terrorist allies, as well as the destabilizing internal networks of corruption and warlordism.

In the last eight years, Al-Qaeda and the Taliban have been able to strengthen and regroup. In 2001, they were not included in the Bonn political process, nor did the international community send enough troops to eliminate them. After their initial defeat, flagging international attention ignored the sanctuaries and sources of their external support. The combination of all of these factors was a deadly recipe for terrorism’s strengthening and re-emergence. Recent developments in the region indicate that terrorism continues to find leadership and guidance from outside Afghanistan.

Beyond the Taliban, a network of corruption threatens our Afghan state from within. Since 2001, old warlords have been able to gain new power by linking themselves to the aims of the international community. Yesterday’s warlords with guns have become today’s warlords with position and money. The international community has continued to ignore the illegal operations of these power-holders, contributing to a deepening nexus between warlordism, drugs, and the criminalization of politics. This internal weakness denies the Afghan people’s desire for justice and destabilizes the democratic process in Afghanistan. International efforts in Afghanistan should instead focus on supporting the moderate forces for progress. Moderate elements are a more stable foundation for our state.

First, the right strategy stems insecurity to create space for governance. Where there is no minimum security, governance is impossible. Thus, international forces can help our government create a human security corridor where we can move beyond only fighting the Taliban to delivering an effective system of justice, healthcare, education, and safety of movement for Afghans. We must establish this minimum-security environment immediately. But for long-term success, troops should move toward establishing a more permanent security by eliminating the sanctuaries that provide long-term support to the insurgency. In addition, politically we should work to weaken the Taliban and their extremist allies by separating out those elements that are willing to support a strong, stable, democratic Afghanistan and by including them in the political process.

Second, the right strategy strengthens governance. Interlinked with fighting the Taliban is establishing Afghan government institutions, including effective Afghan national security forces. At this time of economic constraints, quality of strategy is more important than quantity of resources. International support should be accomplished through a strategy that maximizes the impact of every international effort. This best-quality strategy is coordinated, continuous, and accountable.

Recently there has been improvement in the coordination of international efforts, but we must continue to be focused. Military efforts are still visualized through a province-by-province, instead of a national, perspective. Civilian and development work is often conducted by piecemeal non-state organizations outside of the Afghan government. Many foreign experts also do not stay long enough to complete their projects. But this does not have to be the case. The Paris Donor Conference of 2008 recognized that international engagement should be coordinated around the pillars of the Afghan National Development Strategy.

In addition, how we spend money must be clear and accountable. The Ministry of Finance recently revived our donor database. International aid should be channeled through this database so that we can measure how well funds have been used. Private contractors must also be accountable.

Today the most visible test for strengthened governance is in the upcoming elections—a crucial moment for democratic progress in Afghanistan. We are happy to see full international and Afghan commitment to fair, free, and transparent elections with a level playing field for all candidates. It is important to keep the right expectations: A successful election does not deliver a quick-fix solution to all challenges. Instead, our goal is to strengthen a continuing democratic process that is fully and completely Afghan-owned.

Third, the right strategy requires sustained regional cooperation. The region has the most to lose—and the most to win— from Afghanistan. Increased bilateral, trilateral, and multilateral processes can reduce negative perceptions and increase positive, productive action. Together with Pakistan, Afghanistan has recognized that we face a joint threat of terrorism. We are coordinating our efforts to defeat this threat. We also look toward NATO and the United States to support us in eliminating sanctuaries for terrorism in the region.

Beyond Pakistan, Afghanistan looks to bilaterally work with Iran, India, Central Asia, Russia, and China on issues of security, border control, trade, and drugs. For the first time in a long time, many countries in our region understand the possibility of honest cooperation. Uzbekistan’s energy supply and the Russian Federation’s facilitating of the NATO supply line are two important examples. In addition, trilateral processes with the U.S., Pakistan, Turkey, and Iran are becoming important ways to forward talks for cooperation. Multilaterally, Afghanistan is committed to participation in the Economic Cooperation Organization (ECO), the South Asian Association for Regional Cooperation (SAARC), and the contact group of the Shangai Cooperation Organization (SCO).

The focus on Afghanistan and the renewed work through bilateral, trilateral, and multilateral processes ultimately strengthen the frameworks in which they are conducted. And with stronger regional frameworks and organizations, we are better equipped to face the future. Afghanistan’s present challenges may very well be the catalyst to a stronger, more peaceful region for decades to come.

TAKING ADVANTAGE OF THE RENEWED FOCUS ON AFGHANISTAN

Today there is refocused international attention on Afghanistan and a genuine momentum heading in the right direction. We must seize the moment to cement our progress in an improved political-military strategy. This strategy increases the understanding of Afghan culture and of the enemy in order to prioritize security, strengthen governance, and emphasize the region. Success in Afghanistan will mean opportunities realized: It is a state rich in minerals, energy, and agricultural potential and is a state located strategically to serve as a land bridge between Europe, Central Asia, South Asia, and China. Afghans hope to become active and productive players in global progress.