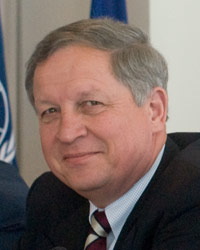 I will share some observations concerning the discussions over the past two days and also talk about what we could do next year. The main focus, unsurprisingly, was on Afghanistan and Pakistan. Success there is essential for domestic as well as for global security: What happens in that region impacts the security situation around the world. Whether we like it or not, this is a fact. We understood that there are inherent links between the Afghanistan conflict, the Middle East, and even Africa. We touched on the NATO Strategic Concept. And we discussed topics like energy security, climate change, piracy, use of space, and nuclear proliferation, just to name a few. These are all crucial issues in the global security arena.

We also had a great deal of exchange on relations between nations, Georgia-Russia for example, and between organizations as well: the EU, NATO, the U.N., and even the African Union. How do they interact with each other? Finally, we heard a view from India, which is extremely important as well.

So, how should we further develop these topics given what the global situation is likely to be next year? There could be a panel on the NATO Strategic Concept, as it should be coming to a close by that time. It would be an opportunity to assess the state of the Alliance, including NATO-Russia relations, since outreach is very important to NATO not only on the political front but with regard to promoting true military cooperation as well.

The Middle East... We had an excellent panel on the Israel-Palestine issue. It would be very interesting if we repeated this with an Israeli official participating so that we are not just talking about Israel-Palestine but are talking with them and engaging them as well.

A related topic that Ferdinando Sanfelice di Monteforte has described so eloquently is counter piracy, certainly a matter which will not have faded by this time next year.

Cyber communications and new technologies are also crucial elements and we always learn a great deal from the industry representatives. Are they really, what I heard here, a capacity-building element in support of the military or in support of strategies? This vision is worth further developing.

And then there is the need to plan together with NGOs, when they are involved, and maybe with other organizations such as INTERPOL. The topic is promising because we have not addressed it in detail in the past. So deterrence, defense, development... I do not know whether this framework is still entirely valid, but it will certainly be important to build on it.

The Balkans... We will see if the deterrent presence and nation-building efforts are fruitful and if the situation remains calm. If so, it could be the first year in which we will not have to address that part of the world. But I am afraid that I am probably too optimistic.

There may also be interest in discussing the effects and the outcome of the engagement, hopefully a positive engagement, between Russia and the United States on the nuclear arms control side. One question I heard was: What is the value of tactical nuclear arms in the future? That is an interesting side point. But I think it is more important for these two great nations to move forward on the fundamental issue. It could be worthwhile to include Korea, both North Korea and South Korea (because we are talking about global security and not only Afghanistan, the Middle East, NATO, and Russia) in the dialogue. A panel to talk about strategic communications is also warranted. This is something that we are trying to do in NATO. But of course we need our nations, and it is a very complicated and challenging field.

I am very grateful that you invited me again to be here. If you do so again next year, I promise to try to be here. I found it extremely helpful.

AN ANECDOTE ON AFGHANISTAN

As to the comprehensive approach, I would like to add just one anecdote from Afghanistan: Very recently, I was in Kambu and had a chance to talk to two elders; one Pashtun and one Uzbek. And I put this question to them: “Our intelligence has told us that it is mostly local people who fight themselves and fight us. Well, these are your children, these are your sons. What can you do to talk to them, and to stop them?” They each gave their own arguments as to why this is not feasible and were very adamant about it. One response was, “there is too much corruption in our country.” The other was, “there is no real governance in our country. We do not see any effects trickling down from the center of government to our province, to our district, to our village, or to our city. We do not see investment, so the international money does not come here.” And the result of that is, there is no work for the youngsters. There only need to be a few extremist Taliban coming from either Pakistan or the south of the country, and then these youths become inflamed. They want to have something meaningful to do, or at least something that they think is meaningful. This is a vicious cycle. And on top of all that, in that particular province the governor does not use the instrument of the Sharia, which is part of the Afghan culture, to resolve problems on a local level. So they are disappointed about that as well.

To break this vicious cycle, we need to proceed just as we discussed here: comprehensively, collaboratively, and cooperatively addressing all of the surrounding issues. If we are successful, then Afghanistan will be better off in the end. But Afghanistan has to do its part as well.