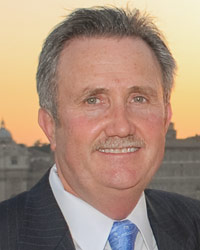 We have been on a very interesting ride since the Moscow workshop regarding the world of cyber security, because that subject has gotten so much attention. Many of us in the field consider that meeting as the tipping point, because, since that time, we have had several incidents and events, from those in Estonia to those in Georgia to the cable cuts in the Mediterranean to other cyber-related incidents that we keep reading about in the paper—malware incidents, Cisco routers that have been counterfeited, networks that have been taken down, viruses that have hit. Cyber security clearly has gotten the attention of everyone and is now a very high priority for most nations.

CYBER SECURITY AS A HIGH PRIORITY

Recently, President Obama made a statement about the major focus his administration has on cyber security. Just be- fore this workshop, the Secretary of Defense announced the creation of a cyber command to focus on this very important subject. A recent press article said that the U.K. is about to announce the creation of a national strategy for cyber security, something we know the British have been working on but that is now ready to hit the streets. We also just heard from Henri Serres that the French are about to announce a similar national initiative, and NATO also has been focusing with increased vigor on cyber security.

Cyber security has become a major priority, both at the military and the international level. People have moved on from a geeky IT kind of discussion of cyber security to a discussion that has national importance, and includes everyone from the Prime Minister and President on down. That is great, because each of us realizes that, in the Information Age, we will not be successful if we do not know how to deal with the threats facing us in a world so dependent on information technologies.

THE IMPORTANCE OF THE INTERNET

Just a few years ago, in the Department of Defense we tested the F-35 in the far western part of the United States. The commander tried to run the exercise but could not load the necessary operational data on the F-35 because the network was down. He became increasingly frustrated and said, “What is going on? I have a program to run and I am spending a lot of contractor money.” After about six hours, the commander and his group determined that the network is pretty important. Operationally, it would not have looked too good if that very expensive airplane had been sitting on the tarmac in a wartime scenario. A similar incident took place when both the British and the French had their weapons platforms disabled while they waited for the network to respond.

Early in 2009, I was on a U.S. aircraft carrier and asked the captain, “What is the most important thing on this aircraft carrier?” I expected him to talk about the airplanes or the nuclear engine room, but he said, “The Internet is the most important thing. I have 5,000 sailors on this aircraft carrier under the age of 20 and everything we depend upon for morale and for the welfare of these sailors requires the Internet to be constantly up.” And that is not just for morale and welfare. A lot of the other things that a carrier requires depends on the Internet or, as the DoD calls it, a NIPRnet, to be up and running.

In Russia in 2003, I talked to a senior member of the Russian Defense Ministry who said to me, “We really do believe strongly in this concept of net-centric operations, but what happens if the Internet goes down and is not available? What is your strategy for that?”

That is where we are today. Most nations are talking about cyber security, most nations are trying to deal with this interconnected world, because everybody realizes that, with today’s very fragile economic situation, we depend more and more on the Internet. NATO, as I said, has a major focus on this subject, and we can all see that it revolves around leveraging the technologies of the Internet, for use in places like Africa as well as for sustaining operations in Afghanistan.