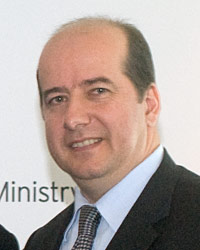 In speaking about how to address the new Strategic Concept, I am going to build upon some remarks made by others in this panel. First, Stewart Eldon raised the issue of finding the right balance between collective defense and expeditionary forces-a topic echoed by Robert McRae. As a corollary, I would like to add the idea of ensuring balance between territorial proximity and strategic distance. Just think about what the instability in the Balkans at the beginning of the last decade has meant not only for the region in the vicinity but also for the whole of Europe. From the perspective of a country at the frontier of the Alliance, this is a particularly important issue.

The question of how to deal with the new threats and challenges is enormously interesting as well. This is not just from the philosophical point of view-issues like whether to include cyberdefense or how to include terrorism in Article 5-but also with regard to more practical matters. Is the way we are doing business today conducive to responding properly and efficiently to the new challenges like counterterrorism, cyber attacks, energy security issues, and the like?

Another question now being asked is whether we should consider bringing more homeland defense-type of cooperation efforts into NATO. If we were to implement this in the manner in which it is done in the United States, for example, this would mean greater sharing between countries and NATO Allies, both in terms of exchanging information and in terms of holding common activities.

Or maybe we should expand towards a more complex and more multidisciplinary approach? This would involve having more meetings in NATO with specialists that are highly focused on issues like cyberterrorism or energy or missile defense. If we want to bring this to the attention of our leaders, why not have ministerial meetings in NATO at the level of interior ministers, IT ministers, energy ministers, and-even more importantly-finance ministers? (We have discussed how important it is to have the backing of the financial arm of the government.) My last corollary to this point regards whether our speed of adoption of technological change at NATO is appropriate in terms of how we operate, both as an international staff and as a military staff?

Stewart Eldon mentioned a comprehensive approach and how NATO should relate to other organizations, the EU, and especially the United Nations. We are very keen on this and think we should go further, not just by signing a Memorandum of Understanding but also by establishing genuine strategic structured relationships with these organizations if we really mean it.

Another element that is essential when speaking of the new Strategic Concept is the future of our partnerships. These partnerships have been extremely successful, not only for driving the enlargement process but also by adding value through the dialogue dimension, practical cooperation, and participation in operations. So, how do we go forward to make these more efficient to respond to the requests of our partners, and to make the network of partnerships more coherent?

Last but not least, I would like to raise the issue of how we can extend NATO’s soft power. In the last two decades-and especially since the last Strategic Concept-NATO has developed a soft power dimension. Partnerships are an important part of this, but it is also about strategic communications outreach. If this becomes established as a priority, we can readily transform the perceptions of NATO.