Russia’s Conflict with Georgia: Uniting for the Way Ahead 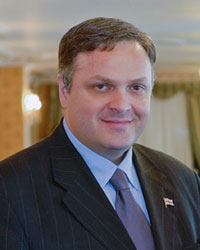 It is a pleasure to be here and I am glad to speak in front of you once again. Since the seminar in Rome, many things have happened in the world, particularly in and around my country. Unfortunately, many of the things that we anticipated happening last year did happen. Russia, our neighbor and a country with which we have long historic ties and many positive things in common, decided to go beyond just trying to manipulate the separatists and use them to maintain leverage over Georgia. Russia tried to be assertive and control the region, particularly Georgia, because the region is important and because Georgia is important as a gateway not only to the South Caucasus but to Central Asia as well. Geography determines many things, and, given Russia’s desire to be a strong player in the world and to return as a world power, the country needs to control the means and resources of oil and gas delivery. We, the civilized world, see Russia’s extension and enlargement of its security zone as not beneficial for Russia.

Unfortunately, very soon after the last seminar and many long discussions and arguments, on August 7, 2008, the active phase of the war started, although for 17 or 18 years Russian troops have been present as peacekeepers in the occupied areas of both Abkhazia and South Ossetia. They were only so-called peacekeepers, however, because they never were neutral, impartial, or tried to meet their mandate-that is, to facilitate confidence-building and protect those on the ground; support Georgia’s statehood, territorial integrity, and human rights; and also make it possible for refugees and internally displaced persons to return to their homes and live side by side with their friends and neighbors as they used to. We know that they supplied the separatists with weapons; supported them politically, financially, economically, and with propaganda; and also in general supported separatism.

Regrettably, it went beyond this. Right after the NATO Summit, when NATO declared that Georgia, along with Ukraine, would become NATO members but failed to provide them with Membership Action Plans, this NATO decision sent a signal to Russia that, indeed, one day, these countries will become members of NATO. It also sent a signal that the Alliance is not fully united, that there are disagreements and no real opportunities to protect these two countries sufficiently, thus creating a window of opportunity for Russia to block the process. As I said, extending areas of security and democracy is viewed by Russia as a kind of threat. The Russians believe that if Georgia enters NATO, Georgia will be gone forever. Then Russia will not be able to realize its plan to have its hands on the oil and gas resources and delivery means in the region. It will also be very difficult for Russia to put pressure on the neighbors it seeks to control, and this would be a bad precedent for Russia.

Of course, it was simple to create a situation in which it was difficult for the world community to determine who shot first. Sadly, this became the main issue, although we know who crossed the border first and who shot first; the fact is that war happened on Georgia’s territory—we never entered Russian territory. Georgian citizens died, and Georgian citizens now suffer. Ethnic cleansing is being conducted by Russian forces and their proxies in South Ossetia and upper Abkhazia. Many villages in South Ossetia that were under the control of the local government loyal to the central government have been bulldozed to the ground. There are no signs left of the people who lived there or of these villages.

Right now, despite the cease-fire accord signed by three presidents—Medvedev, Sarkozy, and Saakashvili—in practice Russia is violating all six points of the cease-fire agreement. Not only has Russia not withdrawn to its pre-August 7 position, but it has put additional forces on the ground, which fully occupy all those areas plus the Akhalgori region, the village of Perevi, in Upper Abkhazia. The Russians have claimed that events occurred in South Ossetia but they never answered the question about Abkhazia: Why did they attack us in Abkhazia and why now do they try to prevent a European Union monitoring mission from entering the areas defined by the cease-fire six points accord? This is very regrettable, and everyone has condemned Russia’s blocking of the OSCE mission in the Tskhinvali region of South Ossetia and, more recently, Russia’s veto in the Security Council of a U.N. mission in Abkhazia.

We believe that Russia wants to eliminate the international presence and not have anybody there to see the atrocities that are taking place, and the gross violations of human rights on the ground, especially in the Gali and Akhalgori regions, where the greatest majority of ethnic Georgians live. Russians are also targeting those who are against the occupation policy; ethnic Abkhaz and ethnic Ossetians are being suppressed and their human rights violated. Every day there are killings, kidnappings, and violations of human rights.

GEORGIA’S INTEGRATION WITH THE EURO-ATLANTIC COMMUNITY

In the face of all this, Georgia tries its best to coordinate its efforts with the international community. The European Union monitoring mission is now even more vital, and is practically the only real deterrent against Russia’s efforts to wage another war and start another wave of aggression. Prior to August 7, Russians conducted Caucasus 2008 military exercises at the border with Georgia, and their agenda was to put down Georgian forces. They plan to have the same kind of exercises again, even larger, in the North Caucasus, in the immediate vicinity of the Georgian border. Of course, we worry that a second wave of aggression might occur because their goal has not been accomplished. Their goal was not just to control tiny South Ossetia, which became in effect a military camp, but to control all of Georgia, and put down the legitimately and democratically elected Georgian government. Last year, I said that there is no hidden agenda: I said that we just need to see what the Russians are doing and what they are saying, and when we put all this together there will be a clear picture of what their next step is likely to be. That is exactly what happened. Therefore, for us, European and Euro-Atlantic integration has become even more critically important.

One positive thing is that Georgian society consolidated around Georgia’s ideal of Georgian democratic statehood—a state that belongs to the community of democratic nations of Europe and the Euro-Atlantic community, united around the idea of joining NATO and, in the future, the European Union. That is what we share with most of the political parties, even the radicals who rallied for several months in front of the Parliament and the Presidential and Government Chancelleries, blocking the streets. Georgian society is very firm in its desire to continue to build democracy according to genuine European standards and to become a NATO member, grow closer to the European Union, and harmonize its legislation.

Therefore, we took some major steps forward after the war. The NATO-Georgia commission was created, which will lead us toward NATO membership. An annual national program was started in December 2008, enabling us to concentrate on our homework and the further reform of our defense and security institutions, as well as to continue the fight against corruption and to develop economic, educational, health care, and environmental reforms. All of this works in parallel with the European Union ENP (European Neighborhood Policy) action plan that we are implementing and that has similar goals: Strengthening our democracy, strengthening the rule of law, strengthening the judiciary, and harmonizing legislation with that of the European Union. But we are not doing it for NATO or for the European Union: We are doing it for ourselves and for the well-being of our people, because we know that there is no other way to unite our country, contribute to peace and security, build a modern state, and give our citizens a chance to live in a normal and flourishing European country.

This work is indeed very beautiful, with a great deal of potential. Because of our vigorous reforms, the World Bank declared Georgia Europe’s number one reformer, based on our five-year reform activities. We are also among the world’s five best reformers in terms of financial and economic reforms. Of course, now we need to continue these reforms. We are committed as far as Georgia’s domestic policy is concerned, and we are committed to continuing to work with both the parliamentary and extra-parliamentary opposition. To strengthen our democracy, we have offered and are pushing forward a wide range of reforms, including a constitutional reform, an electoral reform, and a local governance reform. We hope that Georgian society will be united and more mature. Probably to the surprise of the entire world, the Georgian government handled the protest waves very peacefully and in a mature way, and received the full support of the European and North American ambassadors as well as ambassadors from the democratic nations.

UNITING FOR THE WORK AHEAD

There are very positive developments in our country, but the Sword of Damocles still hangs above our necks, because Georgia is still unprotected. We do not believe that anyone can come and physically protect Georgia by sending troops, but we do believe that the international community must be united and that the European Union and NATO must speak with one voice to make Russia understand that having a peaceful, united, democratic, European Georgia as a neighbor is a benefit, not a disadvantage, for Russia. That is what we seek and look forward to. Unfortunately there are no diplomatic ties between our countries and there is only one venue in which we discuss things, the so-called Geneva talks. However, the Geneva talks are downplayed by Russia because, again, at this point, it is not in their plans to speak with Georgia as an equal partner and as a country whose sovereignty, territorial integrity, and freedom must be respected. Therefore, they don’t welcome any kind of activity concerning Georgia in which the international community is involved.

However, we are absolutely confident that, if we in Georgia are united and if the international community is united, we can deal with these issues. Russia is an important country for the international community and it is important for us as well. We believe that one day, when Georgia is on the safe side, Russia will behave pragmatically and constructively and will seek to have the benefits of a peaceful, united, democratic, European Georgia that is a member of NATO and therefore will establish a better relationship with us. We hope that this will materialize and look forward to it taking place.