His Excellency Imants Liegis
Minister of Defense of Latvia 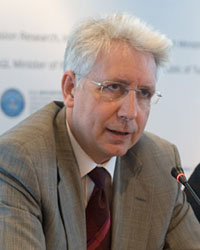 It is good to be back in Istanbul because in my former capacity as Latvian Permanent Representative to the Alliance, I had the privilege of being here when Turkey hosted the important 2004 Summit in which Latvia, along with six other aspiring members to the Alliance, was admitted to NATO. That was of course the big bang: people have probably forgotten about the big bang but for us it was extremely important. From the Northern perspective and Latvian perspective, certainly it was a critical accession to the greatest military alliance that history has known. So, we were very proud to become members of the Alliance, having fulfilled all of the requirements of the Membership Action Plan and the requirements of democracy and human rights that accession demanded vis-à-vis both the Alliance and the European Union.

NATO MEMBERSHIP AS AN EXERCISE IN REGIONAL COOPERATION

It is important to recall that this happened five years ago. Our accession was also an important exercise in regional cooperation. Originally, this panel was going to be focused on security challenges from the Baltic to the Black Sea, but of course we have got the three Bs now—the Black Sea, the Baltic Sea, and the Balkans—I will focus more on the Northern European aspect and then come on to the Black Sea regional element because as I mentioned, for us, integrating amongst our three small countries of Latvia, Estonia, and Lithuania, actually was very important. It was a major part of the process of moving into the Alliance where we were able to show that the interests of our three countries together were mutual and, at a very early stage, we were able to recognize that this was an additional value that we brought into NATO. I would argue that this is still very much the case because Baltic cooperation has continued to flourish. A few days ago, my Estonian colleague, Jaak Aaviksoo, was visiting a town in Latvia where we celebrated the 90th anniversary of a joint Latvian/Estonian victory over Germany, then the enemy; and I have been in office for just over 100 days and I have already had five bilateral meetings with my Estonian counterpart during that time. So this just gives you an idea of how close the Latvian/Estonian and the Latvian/Lithuanian cooperation is. It is particularly close in the area of defense and military cooperation where we have a number of joint projects. We have a very successful defense college, the Baltic Defense College based in the ancient university town of Tartu in Estonia. We have a Diving School on the Latvian coast that also trains Georgians. It is a Baltic project. We also have an Aerospace Initiative and the fact that the Alliance has been able to deal with the air policing of the NATO airspace in Latvia, Estonia, and Lithuania is very important with regard to the tangible presence of the Alliance in our countries. I describe this as a NATO aspect because we are members of the Alliance so it is not just their patrolling of the Baltic airspace; they are helping us because of the lack of capabilities that we have to deal with air policing. NATO is very present in our countries through air policing.

IMPORTANCE OF THE REVISION OF THE NATO STRATEGIC CONCEPT

As we get into this next phase of our membership after the important Strasbourg / Kehl Summit, I would like to stress that, for us, the Strategic Concept that is being revised is also extremely important. This was discussed yesterday and our Portuguese colleague, Minister Severiano Teixeira, mentioned the priorities that he saw, including enlargement. From our perspective, the core function of the Alliance for us is still crucial, i.e., the collective defense aspect, along with the new threats that have emerged since the existing Strategic Concept was drawn up. These new threats relate to things like energy security, cyber attacks, and terrorism which have been in focus during the last several years and which have become the bigger threats to global security in today’s age. We are looking forward to being engaged in discussing the Strategic Concept and having some input. We have a candidate for the group which will be focusing on the Strategic Concept. In fact, we have a joint Baltic candidate and hope that he will be accepted in the group of wise persons working on this new document.

SECURITY IN THE BLACK SEA REGION

Linking into the Black Sea region and the question of security within this part of Europe, Turkey is very much a part of Europe. Latvia fully supports Turkey’s aspirations for joining the European Union. As to the August 2008 events between Georgia and Russia, Latvia felt that Europe was now facing a new security situation. This was really a wake up call that we were no longer in a status quo following the last enlargement and the lessons that we learned were very traumatic. The people in Latvia witnessed our joint neighbor, Russia, actually militarily intervening for the first time since the collapse of the Soviet Union on the sovereign territory of a neighboring country. One of the pretexts that was used for this intervention on the Russian side was to protect their nationals living in Georgia. For us, this was a very worrying lesson to be learned and it made our membership in the Alliance even more relevant. It certainly set alarm bells ringing among the Latvian population and recalled memories of how we had been taken over by the Soviet Union in 1940 as a result of the Hitler-Stalin Pact. So that was a very pertinent lesson that we heard earlier from the Vice Prime Minister of Georgia and we hope that we will not have a repetition of what happened last year. The fact is that there has been a refusal to continue the ongoing presence in Georgia of two important international organizations, the United Nations and the OSCE. The EU Monitoring Mission as we have heard is performing an important but limited role because it is not allowed into the territories of South Ossetia and Abkhazia despite the cease-fire agreement that was mentioned also in the discussion earlier this morning.

So I agree with Giorgi Baramidze when he said that NATO brings greater stability and security. Certainly that is the lesson that we have learned. We have made a contribution to NATO and we have 164 soldiers serving in Afghanistan at the moment, 30 of them in the east of the country in the Operational Mentor and Liaison Team (OMLT) in a very dangerous environment. We have had some casualties recently. But our sense is that the Alliance does bring security and stability to the region. We are fortunate in the Baltic region that it is now a secure and stable area and we hope very much that this security and stability will remain in the Black Sea region in the years ahead. We must continue to engage with Russia. We do feel that it is very important to continue the dialogue with Russia, our important neighbor and strategic partner. We thought that there had been a slight halt in the relationship with the EU and NATO as a result of this event but are pleased that the partnership and cooperation is back on track.