Israel and the Arab World

Ambassador Hassan Abouyoub
Ambassador-at-Large of the Kingdom of Morocco 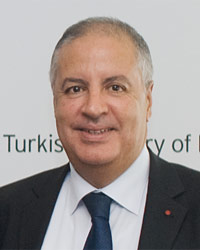 The values that underpin the state of Israel are under strong stress and erosion. This explains to a large extent the evolution of domestic policy in Israel and is a new factor that needs to be taken into account in the development of future strategies. I wholeheartedly agree with those who have pointed out the limits of any hard security policy device option or conception. Israel itself, as a military superpower in the region, has failed completely in terms of accomplishing its strategic aims. In fact, it has failed to the extent that even the Israeli people are losing confidence in the superiority of the Israeli military system and technology.

First, the hard security concept is facing the emergence of non-state actors. This challenges all of the tactics and methods that we have been using since World War II. Second, the current situation also shows the failure of any unilateral approach to conflict resolution. This applies to the Israeli initiatives, it applies to Iraq, and lastly it applies to Gaza. These unilateral steps and measures increase the threats to the stability of the Arab regimes and Arab nations, and at the end of the day they also increase the global insecurity of Israel. There are growing public opinion forces in Israel and elsewhere highlighting the fact that the post-Rabin policies-or unilateral public-based policies-are not positive and are counter-productive to the interest of Israel.

NEW FORCES IN THE ARAB WORLD

Another issue is the emerging forces in the Arab world. The gender factor is one of these forces, not only in Kuwait but in many other countries as well. In addition, there is a strong unionist trend appearing in the Arab political market, mainly because of the widespread feelings of humiliation experienced by the Arab peoples after Iraq, after Gaza, and elsewhere. Nobody can ignore this-particularly not our nations and particularly not the ruling regimes. They are facing considerable threats to their survival. This is a consideration which we must factor into the equation when developing new strategies for dealing with the Arab-Israeli crisis.

Changes in demography are another increasingly important element-probably the most important in fact. There is now a global consensus that the world is converging towards demographic transition or even post-transition. Translated into the Arab world or the regional Arab issues, it means that the traditional divides and delimitations are no longer valid; North- south and east-west approaches will not be effective any longer because this converging demographic factor jeopardises not only Israel but all of the tradition-based political systems and governance systems in the region. These demographic changes are therefore one of the major issues affecting the way we must deal with this conflict.

THE ROLES OF THE U.S. AND EU

I will not go beyond what was said on the economic crisis and on the global challenges. These are elements that all add even more complexity to the equation. What the current politico-economic problems do mean, however, is that the Middle East conflict is once again becoming a regional conflict. This is because the traditional backing of the U.S. to Israel is being revisited; there is no doubt about this. It is also because the EU, despite its involvement in defending the welfare of the Palestinians in the past decade, has not yet resolved its leadership problems. The EU needs to tackle a number of questions regarding its mission, such as “What is the role of the EU in the world?” and “What are the EU’s capabilities in order to master its destiny in conflict resolution and in peacekeeping?” before it can be truly effective.

All of these issues set aside, however, there is strong feeling among the Arab public opinion that the EU is needed as a major player in the region. We cannot ignore this and I do not think that Brussels will ignore this either in the years ahead.

IRAN AND THE UNION FOR THE MEDITERRANEAN AS REGIONAL ACTORS

In saying this, let us go back again to the nature of the conflict and to the efforts required from the regional actors. We now know how the map is drawn as far as the actors in the Middle East are concerned. One of these players is Iran. The result of unilateralism, both on the part of the U.S. and Israel, has allowed Iran to re-emerge for the first time in 2,500 years as one of the major players in the Mediterranean. Whether we want this or we do not want this, the situation is such and all of us in the countries on the shores of the Mediterranean are aware of it.

So if this is a regional conflict more than ever, what is needed is a framework-a new framework. I agree with Ambassador Masa’deh in highlighting the role of the Union for the Mediterranean. It could also be enlarged to include perhaps two or three additional major players of the region. Dealing with the Arab-Israeli conflict could be one of the main scopes of the renaissance of the Union for the Mediterranean.

We have a lot of assets and a lot of tradeoffs to consider in the establishment of a framework. If this particular framework is not possible, we of course still need to invent a new framework because the U.S. role in the region is most definitely shifting, especially after President Obama’s speech in Cairo. Beyond his speech, having been in Washington recently my strong feeling is that the U.S. needs allies-not only players but allies. In parallel, the Arab world needs to sustain the new philosophy developed by President Obama, at least in regards to unifying the Palestinians once again. Nothing can evolve if we do not involve or commit ourselves more than ever to bridging the gap between the two Palestinian camps. It is entirely possible to do so, particularly on the eve of the new elections. We will not have reasonable, positive elections or any chance of peace if the Arab world is not playing its role as a mediator, facilitator, and honest broker between the two Palestinian camps.

Finally, what could the Russian contribution be to this process? This is a key issue, especially if we consider Iran as a major player and if we consider other players like Syria, etc. Whatever we may think about Russian diplomacy’s past track record in the region, in the same way that the EU is needed, we also need Russia to play a more proactive role in balancing the forces that can contribute to a new era in this region.