The Business of Global Security in a Stressed Global Economy 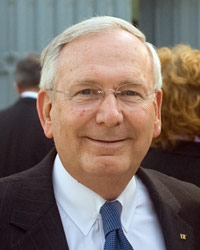 There is a myth that developed nations’ aerospace and defense industries are somehow immunized from the global economic downturn. That idea is just that, a myth. The distressed global economy has had an impact on both those industries’ financial capability to sustain a robust, responsive industrial base and nations’ willingness to make greater investments in national security at the expense of domestic priorities.

THE EFFECT OF ECONOMIC PRESSURE ON GLOBAL SECURITY

I would like to connect the dots and pull some points together about this link between a distressed global economy and investments in national security. First, I think it is helpful to provide a brief perspective on the magnitude of the economic pressure that we all are experiencing. Second, I want to show what this economic pressure is doing to the aerospace and defense industrial base generally. Third, I am going to talk about what we can and should do to address global security during the economic downturn.

Let me begin by setting the economic versus global security stage. The opening sentence of the annual threat assessment by the new United States Director of National Intelligence, Dennis Blair, may have caught some U.S. legislators by surprise, but it should not have. Director Blair explained that the crisis facing the global economy is a security threat that influences all other security threats faced by the U.S. The aerospace and defense communities do, in fact, exist in the economic arena of which Admiral Blair speaks.

To put global economic conditions in some context, the Asian Development Bank places the magnitude of the total global loss of capital valuation of financial assets worldwide at over $50 trillion. This loss of capital stock is very significant and amounts to the equivalent of one full year of world GDP. The consequence of this loss some see is that countries most open to international trade, including products and systems for national security, may be subject, as the Asian Development Bank puts it, “to the greatest shock on account of reduced world demand.”

Looking at individual Gross Domestic Products (GDPs) close to home, we find that the financial crisis we are experiencing did not start in September 2008. It was well underway for some European countries for some months before that time. The decline in GDP, particularly for a number of European countries as well as for the United States, has been ongoing since the first quarter of 2008. Data released on May 15 of this year by the European Commission’s statistical office Euro- stat indicates a 2.5 % quarterly decline in both the 16-member eurozone and the European Union for the first quarter of 2009. Again, Eurostat data released on June 12 indicates that the April 2009 industrial production in the European Union’s 27 member states fell by 19.4% compared with April of 2008. The prediction is that this downward trend will continue through 2009 into 2010.

At the beginning of my comments I mentioned that it is a myth that the aerospace and defense industries are immune to the consequences of these economic pressures. Let me explain why it is a myth. First, the large defense companies in the U.S. and Europe depend on their major suppliers to provide the necessary sub-assemblies and systems that go into major weapon systems. The first- and second-tier suppliers depend on their own suppliers for raw materials and parts that have a wider market than just the defense industry. It is this wider market that is experiencing the declining demand for manufactured goods. When production declines in these lower-tier suppliers, the primes feel the pressure to buy greater inventory or provide financial support to their supply chain. This economic condition adds even greater risk to the acquisition process that drives defense progress to be behind schedule and over cost. Second, domestic economic pressure adds to the problem, and all of our countries are bowing to that pressure by reducing spending on national security. This reduction only makes the financial problem for major defense companies worse.

So what is to be done? Initially, we need to begin by recognizing that our individual and collective defense industries are not immune to the economic downturn. Second, each of our nations needs to make the efficient and effective acquisition of defense systems and equipment a national priority. Stable defense budgets and time-certain development and production would also be helpful. Programs that take longer than five years stand the highest probability of being no longer relevant to meeting the war fighter’s needs. Last, our collective security organizations need to take on the task of understanding and fortifying the defense industrial base for all our nations. We need to make economic security a linchpin of our collective global security endeavors.

As developed nations, we need to understand the economics of global security. We also need to realize that we may face an adversary whose disregard for the economic well-being of its own citizens and willingness to develop devastating weapons at the expense of keeping its people fed makes him a very formidable foe.