Dealing with the Challenges in Afghanistan and Pakistan:
How Can the International Defense Industry contribute?

Mr. Al Volkman
Director for International Cooperation,
Office of the United States Under Secretary of Defense
(Acquisition, Technology, and Logistics) 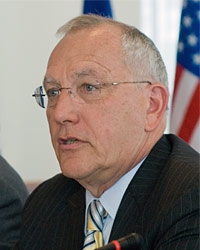 This panel is about providing technology and defense equipment to the war fighter. This is not a new problem. History is replete with examples of men fighting wars without the equipment and technologies that would have saved lives-even though they were readily available.

The panel will address this question: How can the defense industrial establishment (both industry and government) help the war fighter in the wars being fought in Afghanistan and Pakistan? Much of the discussion thus far has addressed this issue.

The Dutch Minister of Defense remarked on Thursday about their success in buying 48 Bushmaster armored vehicles in three years and deploying them for use in ongoing operations in Afghanistan. He contrasted that success with the ten years it normally takes to field a combat vehicle. However, my guess is that for the Dutch war fighter, three years is still a very long time.

Tim Bloechl of Microsoft raised the problem of getting the latest Information Technology into the hands of the war fighter before it becomes obsolete. We do not do that now!

Secretary of Defense Gates has said that the troops are at war, but the Pentagon is not. The Pentagon bureaucracy and the defense industry continue to do business as usual.

Like the Dutch, the U.S. has had some success in providing badly needed equipment to the war fighter-equipment like Mine Resistant, Ambush Protected (MRAP) armored vehicles and technologies that defeat Improvised Explosive Devices (Counter IEDs), but we must do an even better job. We need to provide the right equipment in a timely manner at an affordable cost. The question is how?

We are fortunate today to have a most distinguished panel to address that question.