Dealing with Illicit Human Trafficking and Smuggling of
Arms, Drugs, and WMD Materials 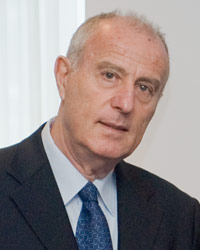 Among the situations most difficult to detect ahead of time, thus making them impossible to prevent, is the existence of a strategic vacuum, something that grows slowly and is mostly the product of omissions by governments that inadvertently create these gaps in their nations’ strategic security and defense postures by diverting resources to strengthen other sectors. This capital sin is seldom the product of bad will, because financial resources for security and defense are, like blankets, never enough to cover all requirements, so difficult choices must always be made, often leaving some parts of the military out in the cold.

The problem is, when these parts are neglected and unattended for a long period of time, those who nurture unfriendly feelings toward our nations inevitably spot and exploit them, because they are weak points for their adversary—us.

THE RESULTS OF GAPS IN SECURITY

There are numerous times in history when such situations occurred, both in peacetime and in wartime. One particular instance was the neglect of the U.S. Navy during a great part of the 19th Century, when Congress did not want to divert funding from the requirement to provide military support to the penetration and colonization of the “Wild West.” By doing so, however, Congress forgot that such expansion sooner or later would cause international disputes.

In 1835, panic spread in Washington, when “following a rupture of diplomatic relations, it was reported that the French Government was sending a formidable fleet across the Atlantic on an observation cruise, manifestly designed to intimidate the United States Government, and to be in a position to strike in case of war.” This was, in fact, the main consequence of the weakness of the U.S. Navy, which had left a strategic vacuum in the seas around America, thus allowing France to enforce her claims on Mexico through her fleet and openly challenge the famous U.S. claims expressed through the Monroe Doctrine. In the Oregon crisis with the U.K. some years later, the U.S. naval weakness was the driving factor that led to an appeasement, very much against U.S. interests.

A similar situation exists today, because Western sea power, on the whole, is very much unbalanced, with very reduced numbers and almost exclusive focus on power projection from the sea. This works against those tasks that are less glamorous yet indispensable for sea control.

THE NEED FOR BETTER CONTROL OF THE SEA

The end of the Cold War led to the delusion that such activities were no longer essential. However, we must acknowledge that we cannot afford to neglect sea control, an essential enabler of sea trade, especially in times of possible exploitation of a power vacuum both by state and non-governmental entities, who might reap profits as well as damage the economic and military predominance of the Western nations. It would be naïve of us to consider that illicit trafficking is connected only with what is improperly dubbed organized crime. This is particularly evident in the case of human trafficking, a cynical trade of human flesh that has become a powerful instrument of international relations.

Mass migrations, as Professor Halford J. Mackinder noted in 1904, are those “more elemental movements whose pressure is commonly the exciting cause of the efforts in which great ideas are nourished,” or, more clearly, they are the driving engine of history. They are not, though, simple spontaneous fluxes, but often are the product of a policy either aimed at solving internal problems or one that is a sort of invasion without weapons.

During the last decades, in fact, it was noted that several mass migrations through the sea have been real acts of policy: one nation, for instance, emptied her prisons by stuffing her convicts and their relatives on a single ship and sending 10,000 people across the sea on a single trip. Also, just before the tragedy of September 11th took place, a number of ships carried thousands of people across the Mediterranean to a country in which diplomatic officials from a third nation were ready to provide these persons with immigration visas and allow them to settle, thus increasing the latter country’s dwindling work force.

In addition, in very recent times, migration through the sea has been an effective tool to exert pressure on other countries to help solve longstanding differences. What is more worrying, though, is that it has become apparent, through judiciary enquiries, that most often the organizers of this kind of cynical shuttle, which causes many destitute people to suffer and die, are members of terrorist organizations that reap huge profits through this cynical trade and ensure the connivance of the sending nation by threatening to unleash fundamentalist cells there.

The smuggling of arms, drugs, explosives, and WMD is seldom the product of initiatives by criminal groups: They need the backing of more powerful structures, thus becoming instruments of policy, whether they like it or not, and supporters of the political aims of those willing to spread destruction and disruption on our soil.

It should be clear, though, that all of these actions are made possible by the weakness of the maritime instruments in the countries of destination, which are unable to exert strict control in the depths of the sea and to thwart attempts against them. Often, maritime power does not need to be called to violent action, because its influence is so evident that nobody dares to challenge it.

Slowly but steadily, the Western nations have become aware of the need to improve their ability to control against these initiatives, even if they are forced to shift the scarce assets of one crisis area to another in order to reopen a door that was closed, thereby shutting another. Operation Active Endeavour, the Proliferation Security Initiative, as well as the maritime component of Operation Enduring Freedom and the two NATO and EU efforts against piracy, are the most notable instances of this kind of action. The impossibility of providing these operations with enough assets to carry them on successfully must eventually be considered in the force planning cycle. We must be aware that we face a number of years of vulnerability before such assets will be available.

It has also been acknowledged that it is not enough to build new assets. We must also put in place new forms of control of the sea, and both NATO and the EU are launching initiatives to that effect. This is an indispensable component of the overall effort to thwart the undermining of Western wealth and power, which cannot be seen in isolation from the requirement to establish again a controlling presence that will protect international trade.

THE DANGERS OF DISREGARDING THE UNWRITTEN LAWS OF THE SEA

Before concluding, I would like to mention another dangerous byproduct of this action-reaction chain: namely, an increasing disregard of some of the unwritten laws of behavior at sea, which are sacred to mariners. Some countries have refused to rescue at sea migrants who are piled up in unseaworthy and foundering boats, and some prosecutors have even accused the masters of merchant vessels who save such desperate people of favoring illegal migration.

Having to face increasing danger resulting from the use of the sea against the West, governments are losing their capability to respect fundamental laws. This attitude dangerously contradicts the West’s key values, thus placing us at the same level as those cynical sea exploiters. We have placed the human being at the center of our ethic, and we must not disregard this principle lest we lose the prestige we enjoy worldwide. Therefore, our nations must act swiftly to emerge from this treacherous state, and avoid experiencing dangerous situations or losing our moral standing in world affairs.