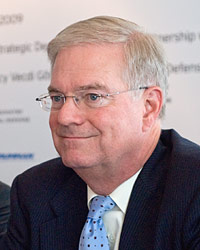 Let me elaborate on a few of the themes that have been discussed by other panelists. These themes include the need, in the face of limited resources and urgent demands, to make our spending more efficient, to increase cooperation, and to place an emphasis on the sufficiency of the total resources-including management resources-to bring fielded capabilities to bear more rapidly.

About six years ago, I was called into the office of the NATO Assistant Secretary General for Defence Investment-the predecessor of Peter Flory-who asked me what industry was planning to do about the IEDs (improvised explosive devices) out there that were killing a large number of our troops. I am sure that similar meetings took place in many capitals, including in Washington D.C., and with many other industry representatives. It is rather remarkable to think about how rapidly industry was able to turn out responses to the IED problem. Protected vehicles were produced and delivered into the field, detection capabilities-including very modern technologies for identifying where an IED may be placed or hidden-were developed, as were sophisticated jammers that can accompany convoys and neutralize an IED if it is operated by a radio signal. Some innovative operational concepts were also implemented; in particular, the use of UAVs (unmanned aerial vehicles) as escorts for convoys in order to be able to determine whether there is anybody up ahead hiding behind a bush. Many very creative developments made it into the field in a very rapid time frame and are supporting the deployed forces. Now that is the good news.

However, there is also a bad news story here. Many of these newly developed technologies which could be deployed with one or more of the national forces in the theater have not yet been disseminated to all of these forces. For example, a very sophisticated and useful IED jammer is not able to get out of the U.S. export control process fast enough.

But from the industry point of view, it is fair to say that given the challenge and given the resources, we will provide many effective responses. Another case in point is the use of UAVs for both persistent surveillance and armed combat. There has been a very rapid evolution of the technology. It has gone from the time just eight years ago when the fact that a weapon might be on a UAV was classified information to today’s attitude of, “Can we please use more of these to save our forces having to go into harm’s way? And by the way they are pretty effective against the enemy.” As Edgar Buckley stated earlier, all of that evolution and all of that capability is brought to you by industry-by a number of different companies of course.

Soft power, or the people side of the industry contribution, was also mentioned and is worth discussing further. Not only do we provide direct assistance in the theater for the weapons, programs, and systems that we have produced and continue to support operationally, but we also aid with the logistics and sustainment in order to be able to keep the equipment going over time in very severe environments. These services are all increasingly being supplied by the private sector.

In addition, we also deal with the human consequences of war. Although we say in shorthand that the military operation is on one side and the NGOs, international agencies, and civil issues are on the other side, in actuality most of the work being done for the international agencies is going to be outsourced or done by contractor support. The expertise to do this therefore relies on the private sector in many cases. This means that the ability to handle displaced persons and refugee camps is fast becoming a capability that industry actually brings to the theater. We contribute not just by providing people; i.e., “here is the guard in the camp”-type of services, but also by providing high technology. This includes environmentally efficient, rapidly assembled buildings and tents as well as the supplying of logistics. It is a very important part of the total industry support package.

THE NEED FOR INDUSTRY CONSOLIDATION

I will conclude with a few key issues. Unfortunately, the financial crisis makes all of this harder. Yet it does not need to. Thomas Homberg made a very interesting point: If governments respond to the crisis with creativity and some cleverness, they can actually take advantage of the opportunity to get more capability for the same resources. There is a need for efficiency and consolidation in our industry, both in the United States and in Europe, and there is nothing like a crisis to push people to make some decisions that need to be made.

Unfortunately, I do partially share the pessimism. The reaction to a crisis initially leads people to go into “protect what I have” mode. So instead of closing a base or consolidating infrastructure or letting the natural evolution occur which might see some companies converge, governments too often try to keep things alive and to keep things going. The government thinks, “I cannot close the base because there is high unemployment.” We understand the political pressures of course; we all deal with them. But it is unfortunate if the crisis is used as an excuse to not do what needs to be done.

The positive side is the need for cooperative programs. European programs have been mentioned, but I would also emphasize that transatlantic programs, where the industrial investment of the United States can be used to help bring capability to Allied industry and forces, are absolutely essential in a time of crisis. The crisis makes cooperation more imperative, not less. It is the key to overcoming all of the challenges that we face.