Which Way Ahead for NATO’s Partnerships? 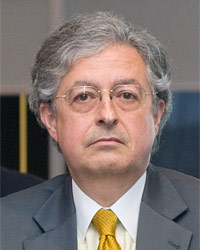 Is NATO capable of predicting the future better than other organizations? If the answer is no, why bother with a new Strategic Concept knowing that its relevance might last at the most a few years? Wouldn’t it be more useful to try to fix problems that have already been identified instead of starting a process that could reveal itself more complex and time consuming than ever? In other words, how can we avoid a situation where, despite its best efforts to adjust to the perceptible future, NATO yet again prepares itself for yesterday’s war?

As a representative of a country not intending to join the Alliance, I would like to contribute some thoughts to the debate. Furthermore, considering that Switzerland is an active member of the Euro-Atlantic Partnership Council (EAPC), I believe it is important to explore the utility of such a structure in the future and, in particular, in the process leading to the new Strategic Concept in late 2010. I will focus on three points: First, how I see the development of NATO in the near future. Second, how can the EAPC and Partnership for Peace (PfP) be most useful in the coming years and how can they optimize their contributions to NATO’s objectives? Third and more concretely, how should NATO’s partners be involved in the Strategic Concept exercise?

THE FUTURE OF NATO

A somewhat disrespectful description of the North Atlantic Alliance would underscore that NATO has almost never done anything it has prepared to do, but instead has frequently had to do what it had not expected. It long prepared for a Third World War, but never fired a shot at the enemy it kept in check; when it did fire shots, it did so in a state of legal unpreparedness, against a foe it had until then not considered an enemy. Every time it has acted, it has done so outside of the territorial scope it had assigned itself. When it has grown, it has mostly been by ingesting former enemies it had never dreamed of welcoming into its midst. And whereas it has prepared for battle against a mighty enemy, it is now toiling against elusive Taliban and sending warships against rag shag pirates assailing tankers with ladders.

On the other hand, NATO emerged stronger than ever after its 60th Anniversary Summit. It now has a re-energized transatlantic link, better perspectives of complementarities between NATO and the European Union, and there is a com-mon analysis of the situation and the strategy to be applied in Afghanistan. Also, as NATO’s departing Secretary General is keen to remark, many aspects of the 1999 Strategic Concept still seem to remain viable and useful today. So, what are the prospects for a renewed NATO making the best use of the new Strategic Concept exercise? Let us first identify the challenges ahead.

Geographically, we can point to well-known trouble spots and volatile situations—Afghanistan, Pakistan, Georgia, the Caucasus in general, Iran most definitely, Somalia, Sudan, other parts of Africa, and of course the Middle East as always. More causally, we can point to tugs of war over energy and dwindling resources, the pernicious effects of climate change, fundamentalism, terrorism and possible new forms of terror attacks, pandemic scourges, not to mention the effects of the economic crisis. Functionally, we can point to cyber attacks, piracy, international crime, and the turmoil of failed states. But whereas the crises and causes for concern may be known, their unravelling and full-scale effects are not known. Moreover, new trouble spots are sure to emerge in the coming years.

What is certain is that while geographical rivalries still play an important role, security challenges are amplified and in some cases accelerated by globalization. In other words, the only thing that is predictable is that NATO—like other organizations and governments—will have to face rapidly changing contradictory forces and events for which it will not be fully prepared.

Therefore, I believe that NATO’s best interests lie in a pragmatic approach. What is called for above all is a new flexibility of structures. NATO should make sure that it is flexible enough to deploy appropriate capacities to the theater of the next crisis. In doing so, NATO should develop instruments to cooperate with its partners in the best conditions possible, so as to ensure that the right mix of capacities can be drawn on and that these come from as wide a pool of military and civil resources as possible.

THE BENEFITS OF THE EAPC AND PfP

This implies finding the best ways to work with partner countries. The structures developed around the EAPC and PfP since the 1990’s are a very valuable asset in this context. It is therefore quite astonishing that the EAPC and PfP are no longer used to their full potential, especially given that several proposals were made at the Riga and Bucharest Summits to strengthen the Euro-Atlantic Partnership.

The EAPC and PfP are instruments to promote shared values and principles and to build confidence between all of the countries in this community. The EAPC validates at the political and diplomatic level the activities and work done under PfP. It is the forum best suited to conducting political dialogue on hard security issues. Furthermore, it involves the political leaders of our countries, and thus has an important impact on the national decision making processes.

But the Euro-Atlantic Partnership is more than that. It was the cradle of the enlargement process and of the contributions of partners to NATO-led operations. It serves as a home for many initiatives like the Euro-Atlantic Disaster Reduction Centre, trust funds, the Political-Military Framework, and policy discussions like the implementation of U.N. Security Council Resolution 1325. It provides a clearing house mechanism for Southeastern Europe, the Caucasus, and Central Asia. Best of all from a Swiss perspective, it allows for institutionalized relations with NATO but also for the self- differentiation of each and every country.

With all of these qualities, the EAPC and PfP are clearly models for other partnerships like the Mediterranean Dialogue, the Istanbul Cooperation Initiative, and even for NATO links with so-called partners around the globe like Australia, New Zealand, and Japan. However, the needs of these different categories of partners are not necessarily the same and creative solutions are required.

THE ROLE OF PARTNERS IN THE NEW STRATEGIC CONCEPT

One area where the new Strategic Concept can bring concrete answers concerns the role that NATO should attribute to its non-member partners, to the first circle belonging to the EAPC and PfP structures, and then to the outer circle of non-institutional partner countries, which may expand further still. A change in the mental structure of NATO might be required to progress on this issue.

This change is important given the fact that NATO will increasingly need consultations with partners in all regions of the world and might eventually even want to partly rely on partner involvement in flexible structures such as the NATO Reaction Force. Given NATO’s increasing difficulty in reaching consensus at 28 countries, some Allies might also want to resort to coalitions of the willing involving partners.

THE CHALLENGES OF PARTNERSHIP

Here is where NATO is confronted with a dilemma. Being open and transparent with all of its partners boosts NATO’s acceptance in the international community but also raises the risk of slower decision making or even blockage. When it comes to operations, partners’ contributing troops are increasingly being associated in the decision-shaping of the Alliance thanks to the Political-Military Framework process. However, partners are often consulted late and without any real possibility of influencing the outcome.

Let me give you one example regarding the recent decision to downsize the KFOR. When it became clear that the question of the transition to deterrent presence would be a main topic of the Defense Ministers’ Meeting on June 11-12, why didn’t NATO organize a Ministerial meeting in KFOR format? A group of Western European partners shared their concerns about this and NATO finally decided to organize an information-sharing NAC meeting with KFOR partners, one week after the decision had already been made at the Ministerial. Furthermore, even though the relevant documents were circulated just before the Ministerial to involved partners, very little time was given to them to react.

Oftentimes partners are confronted with the situation of a “fait accompli,” even in matters of direct concern to them, and this is certainly not the best way to engage them and to give them a sense of ownership. Apparently, there are two main points blocking more information-sharing with partners. The first one is that when Allies do not agree on an issue, they are reluctant to debate it publicly out of fear that their differences might be taken advantage of by non-Allies. The second one is that Allies are willing to share information with some partners but not with all of them due to political and security concerns. While both of these explanations are legitimate, there is scope for improvement to the end benefit of NATO.

VISION FOR THE NEW STRATEGIC CONCEPT

So what should NATO propose in its new Strategic Concept? The simple answer would be the ability to share information with partners even if there is no agreement among Allies. It could involve starting discussions on specific topics in an EAPC or perhaps in an even wider context so that all viewpoints can be expressed at the onset. This, by the way, is what will happen during the launching of the new Strategic Concept process at the Brussels conference on July 7.

A second possibility mentioned on several occasions by Allies is the “compartmentalization” of the EAPC into different groups (partners from Western Europe, the Caucasus, Central Asia, etc...) according to the needs of each. This approach is already in force for Russia, Ukraine, and Georgia in the format NAC+1, as well as for the Mediterranean Dialogue and other partners like Australia and New Zealand. On one occasion, NATO also had a separate meeting with countries from Central Asia and the Caucasus. The NATO+N model has the advantage of efficiency and coherence. However, there is a big disadvantage to choosing to intensify these types of links at the expense of the idea of holding meetings in EAPC format, which is the loss of the sentiment of belonging to a security community sharing the same values and principles. There is also a loss of the confidence-building effect that such a setting has.