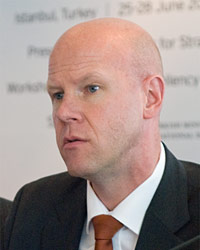 I am going to focus on two points: First, how we envisage the new NATO Strategic Concept and its consequences for interaction between governments, non-governmental organizations, and industry; and second, the economic crisis that is impacting industries and governments and their ability to prepare for the future.

THE NEW NATO CONCEPT AND ITS IMPLICATIONS FOR INDUSTRY

The new concept will be based on the pillar of cooperation between civil actors, military actors, and security actors following the principles of networked security. Thus, three levels of cooperation need to be addressed now.

1. Cooperation within the industrial sector. Our defense industry today is too fragmented and our focus is still very nationalistic. One figure taken from a European Defense Agency analysis illustrates our inefficiency: approximately 80% of Europe’s total defense research and technology budget is spent to meet purely national aims. We must systematically favor cooperative programs over exclusively nationalistic industrial approaches which cause unsustainable redundancies and duplications without sufficiently supporting interoperability between defense, security, and civil actors in line with what I believe are the prerequisites and requirements of the new NATO concept.

As a consequence, my first request is this: Let us spend more cleverly. Let us:

2. Cooperation between defense, security, and civil players in operations. All military operations abroad will someday include a police and civil infrastructure development component with interoperability requirements. All parties engaged in a theatre, from defense or security forces to civil agencies, undoubtedly have their particular specialties. However, due to the convergence of needs when operating in the same environment and in line with the new NATO concept, together we must increase these players’ interoperability whilst considering their ConOps, employment in theatre, equipment, and training.

As a consequence, my second request is to further strengthen cooperation between defense, security, and civil forces, supported by industry. This includes:

3. Cooperation between defense and security forces, governmental and non-governmental actors, and industry. We need a straightforward, honest, and constructive dialogue between industry and the customer base through a multidisciplinary approach involving all actors. With such an approach, certain requirements will gain importance in light of the economic crisis and its effects:

THE ECONOMIC CRISIS AND ITS IMPACT

The world faces increasingly complex global security challenges and threats which include international terrorism, pandemics, climate change, energy security, cyber security, and a severe global economic crisis at the same time. Thus the new NATO Strategic Concept is introduced in a very challenging environment. Because of the crisis, it will be difficult for some countries to maintain their level of spending for defense and security.

Governments can take two possible actions in times of economic crisis, but only one is attractive to us.

To me the choice is obvious: separate national approaches will fall short of the target because they a) contradict our interoperability requirements, and b) ignore the need for industrial and financial rationalization in times of limited resources. Instead, new European and transatlantic collaboration approaches are needed.