Gulf Security in Light of Regional Developments in West Asia

Ambassador Nabeela A. Al-Mulla
Ambassador of Kuwait to Belgium and the European Union 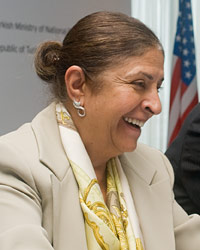 In discussing the importance of the Gulf in security matters, I would like to point out that three elements need to be considered. One, the Gulf’s vital role as a source of energy and energy reserves. Two, its strategic location including its importance for freedom of navigation. Examples of this include the Tanker War of the 1980s, the Gulf War of 1990-1991, and the ICI International Compact with Iraq in 2004. Third, its preeminence, especially in present days, as a financial center.

LOOKING AT THE CHALLENGES

First of all, crises or issues need to be identified. I invite you to think of a crisis, wherever it occurs, as a blip on a radar screen. I believe that what I am about to state is under Chatham House rules. What is going to be said need not represent the collective position of the Gulf Cooperation Council States (GCC). From our perspective in the Gulf, the major issues affecting security are the failure to resolve the Palestinian problem, securing a stable Iran without the threat of a military nuclear program and that does not exert excessive influence abroad, and maintaining security in Iraq and Afghanistan. Naturally we are concerned about the safety of maritime navigation, the security of the energy supply, the threat of proliferation and terrorism, food security, climate change, and the state of the world economy.

Second, the importance or danger of these crises depends on how strong they appear on the radar screen; how they are rated. It is unfortunate that as world actors, we do not share the same reading of a radar screen. An exception was Iraq’s invasion of Kuwait in 1990 and the global reaction to it. I think this was the only case in modern history where the entire world community came together to confront such a challenge.

Taking Iran as another example, the danger of proliferation overrode all other issues-even the threat of growing Iranian influence in the region and beyond. In attempting to resolve the issue of the nuclear program, the actors (5 + 1) in a way conceded to the global importance of Iran. We saw this in the recent invitation by the Foreign Minister of Italy to the Foreign Minister of Iran to attend the G8 meeting. In our view, such actions need careful consideration because they lend respectability and legitimacy to Iran and boost its role on the world stage.

Turning to Iraq, Kuwait is wary of the internal security situation. While we extend all of our support to the Iraqi government to help them reintegrate into the world community, international commitments made by Iraq still need to be implemented.

Third, I would like to pose a question: Are there strategies for dealing with these crises? Are there any balanced and global approaches? From our perspective in the Gulf, it is questionable that this is the case. Although again, this is with the exception of the Gulf War.

The approaches seem to be reactive rather than proactive. Look at Somalia-a failed state for many years now-and the question of maritime piracy. Only when there is a flare up do we try to deal with the problem. The approaches, also, appear to be partial rather than comprehensive, as the Palestinian problem indicates. If you look at the examples of Iraq and Afghanistan, they also tend to be confined to peacemaking rather than nation-building.

Lastly, what is the way ahead? How do we draw up strategies for regions in crises? We have seen the engagement of non-traditional powers in an attempt to resolve the world economic problems. This came a little bit late in the day but nevertheless, it was done.

We also underline for the first time the presence of NATO vessels in the Gulf and the involvement of Turkish and German frigates under the unified NATO flag in November 2008. More of this needs to be capitalized on-and promptly so-with regards to the issues and crises referred to earlier.

Regional powers, individually or collectively, need to be involved. I am referring here to the necessity of touching base and coordinating with the GCC, for example, on the question of Iraq. We are usually informed of actions after the fact, whereas prior consultations would be more beneficial. In addition, the focus should be on basics and on agendas that are already drawn. It should not shift to modifications of plans, as is the case with the Palestinian problem.