Globalization, the Economy, and Security 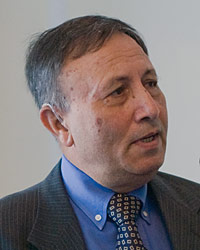 It is a very difficult task to address you after the addresses made by such eminent speakers—strategic thinkers and security specialists who have shared their views with you. I consider it a singular privilege to be invited to share my thoughts to an audience as eminent as this one. I would like to offer a few observations on global security in times of economic uncertainty.

So as not to repeat anything that may already have been stated, let me provide you with an overview, one that will accommodate all dimensions of security, external as well as internal, and that includes technology. It will focus on the very issues that have engaged you in these proceedings so far.

The disappearance of bloc policies was expected to end all global tensions; unfortunately, along with this change, came the preclusion of traditional regulators. Therefore, while risks to international peace were reduced, the situation did not result in an end to violence. Without going into the dynamics of the shift and the global changes that have continued to date, I will now cover the broad themes of the universal changes that we see today. I will group them under three headings, which can loosely be termed “revolutions,” for want of a better word. Their impact on security will become obvious as I outline them.

Currently we are going through a stage of asymmetric multi-polarity. I call it this because, while we are not unipolar, the U.S. pole is the strongest and ideology is no longer a divisive force. Even nationalism is tempered by the desire to build market economies. Tensions are transnational, and they do not stem from the actions of one particular government nor do they remain restricted to a regional sphere. Capitalism and communism can fruitfully work together, a historical change. In a nutshell, economics is becoming as or even more important than political ideology.

This revolution is an obvious instrument of change. Newer technologies are now emerging at a pace that provides access to an array of information, something that could not have been imagined earlier. More open sources are becoming available, which has led to the emergence of distinct themes of national power. Such technological facilitators are, in fact, a prerequisite for economic growth. The ubiquity of global communication is also creating avenues of cross movement of interests and values.

The third and final group of changes can be called the government revolution. The power of international business has increased at the cost of the power that governments exercised earlier. In many ways, the sphere of state control is shrinking, and central governments are, therefore, on the retreat. However, lately, the economic recession is not permitting states to remain so detached and is mandating more proactive intervention. Yet, this intervention is being made through existing institutions of market forces and not as an obsessive form of control.

Let me briefly and very broadly touch on the dissonance these impulses of change are causing. Currently security has a far more comprehensive connotation than a purely military construct. Today, individuals and society as a whole think of themselves as an equal and complementary matrix of national security. The bandwidth of the security dimension, therefore, is impelled to include social, political, economic, agricultural, environmental, and energy ingredients.

The first element of social dissonance is what I term the aspirational dilemma. The information technology revolution as well as the growth of awareness has led to rising expectations while reality has lagged far behind. Such a sense of disillusionment and its concomitant problems can cause sociopolitical upheaval. At the individual level, the easiest exit from this vexation is militancy. At the collective level, the manifestation of societal anger gets directed against the state. The trend lines of conflict, therefore, have moved from regular war to an irregular confrontation, all within the purview of what the military chooses to call the genre of asymmetric warfare.

The focus seems to have changed toward the exploitation of internal alienation or discord in another state to reduce its comparative power, and a host of facilitators encourage this process. These range from the portability of potent arms to the resources of mercenaries and terrorists. Siege mentality and reactive attitudes only assist in discord’s spread.

In any diverse and democratic country, an ethno-religious dimension exists. Ethnicity and religion should actually help nation building, but when political aims and processes exploit them, they become tools of assertion. Ideological underpinnings then result in violence and crime. Globalization needs to reverse this tendency, and can do so by promoting and aiding civil and cultural identities. A universality of ideas should be more important than traditional moorings for seeking collective identity. If universality is not reached, instability and demographic shifts only increase.

Let me once again touch on globalization and economic security. A nation’s economic weight in the world decides its international, political, and military position, and food security, infrastructure, and energy needs are part of this definition. The speed of economic growth, however, cannot be viewed independently but needs to be seen through the prism of cooperative security. This will define that growth’s permanence and longevity. If growth is not seen in this way, the self-interests and restrictions of certain quarters in the world can create uncontrollable turbulence. Therefore we need to accommodate the aspirations of the developing world. This is quite akin to the consideration shown to a pedestrian who is crossing a fast lane of traffic.

All of this forces me to think of the incipient agitation in the minds of nuclear families that are impacted by the economic downturn. Adding to their dilemma is the reality that the world is not uniformly developed. Breeding grounds of turmoil and violence exist wherever institutions of stability have not evolved or where governance issues need attention. With technology facilitating an unrestricted flow of ideas that can be further networked, problems can mutate to increasingly complex forms. This emerging malaise can be tackled only through the strengths of global interdependence.

BENEFITS OF AN INTERCONNECTED WORLD

I have highlighted the problems of an interconnected world, but I would now like to mention the great advantages of this epiphenomenon. Interconnection has increased interdependence, connection, and integration on a global level-a connection that covers all social, cultural, political, technological, economic, and ecological levels. It has enhanced the flow of information between geographically remote locations and has consequently increased the aspirations of people, especially those living in developing countries. Globalization has thus increased economic prosperity and opportunity in developing countries; there is no longer a clear distinction between “foreign” and “domestic,” “internal” and “external,” “national” and “international,” or “global” and “local.”

However, along with benefits also come acute challenges for policy makers. Because of globalization, if some nations fail to cooperatively engage with global economic, security, and environmental challenges, all nations will simultaneously fail to deal with those challenges’ impact on their individual countries.

The implication is that, in order to advance our individual nation’s interests at home, we must increasingly engage with other nations to work out a composite response to challenges. It is no longer possible to believe that problems abroad do not affect countries internally. A nation’s foreign policy, economic policy, and national security policy must increasingly be seen as natural expressions and extensions of that nation’s domestic policy interests, not as some sort of exotic policy removed from reality and alien to the interests of the common people.

In the past, economic cycles of boom and bust left their indelible mark on individual families, altering the lifestyles of successive generations. Economic depressions brought unparalleled hardship to all regions of affected countries, placing entire communities at risk. The current economic recession has similarly affected almost everyone in the global community, either directly or indirectly. It has affected small local businesses, large industries and companies, as well as individuals and families.

Economic risk indicators such as high levels of unemployment and a sudden severe worsening of economic conditions can be important drivers of conflict. Many states in Africa and Asia already face such conditions. As such conditions drive weak states and divided societies over the edge, we cannot wish away the violence and political instability that spills over to other countries in the neighborhood. The situation can also be exploited by terrorists and those engaged in transnational crime, principally in drug and weapons trading for economic survival.

Today, security issues do not remain confined within a single country. As situations in some countries become critical, relatively stronger countries will inevitably be drawn to respond either through military intervention or through financial and logistical support to others, or both. The message is very clear: All nations need to be more capable of adapting successfully to economic uncertainty and change.

The international community must not wait for trouble to break out. It must make commitments to preventive action to contribute to global economic growth and international stability. The wealthy states must not turn inward and indulge in protectionism in the face of tight fiscal conditions at home. Greater international coordination and mutual support are needed more than ever before. Action is needed now to help poor countries grow in a way that is robust, sustainable, and equitable. Measures to protect core expenditures on health, education, water, sanitation, and other basic services are vital.

In a very simplistic way, I find the laws of physics work in development models as well. The effects of action in one location are automatically transferred to another location, even without any perceptible movement. Social chemistry also must be simultaneously harmonized—the universality of ideas has to prevail over restricted identities. Leaders of the world must continue to participate in the process so that the collective will prevails over the short-term challenges we face.

Although the picture may appear gloomy, the answer to our problems is clear: The measures we take today will shape our tomorrow. Current technological and social trends are global and cannot be stopped. Our answers and responses must also be global. The long-term interests of each country are linked to the long-term interests of the world. We cannot afford to think in any other way.