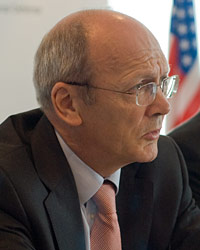 The defense industry and defense technologies are capabilities in the same sense that military forces are. Although we are not normally recognized as such in doctrine and strategic concepts, it is important to change that. Our contributions in Afghanistan best illustrate our critical contribution: We have provided all of the equipment for the forces in Afghanistan and also the means of deploying these forces.

We have upgraded and adjusted the equipment to meet the special needs of the theater and have developed and produced new equipment under urgent operational requirements in a very effective manner. On top of this, we have deployed our own personnel in direct support of the military effort.

To cite some examples, my company has been deploying drones and surveillance equipment, which we own and operate, to the United Kingdom forces engaged in Iraq and Afghanistan. The drone takes off and is placed into an airbox, from where it is taken over by the United Kingdom forces, used, and brought back to the airbox. We then retake control, land it, turn it around, service it, and it is ready to go again. This capability was put in place within six months of the British Ministry of Defence requesting it.

We have also developed enormously complicated and sophisticated force protection devices-which have saved countless lives-to guard the forces against IEDs. New systems have been put in place to track the forces in Afghanistan, and Blue Force Tracker has been developed for that theater. In addition, we have recently deployed satellite communication networks in Afghanistan which we own, operate, and keep in place every day.

None of this would be possible if the defence industry were not there, ready to respond, to the requests and needs of the military. In having these technologies available-I will not say under our sovereign control, but in running and operating them-we provide the military with important capacities.

NATO should therefore help boost the efficiency of the defense industry. This means not just providing financial support but also facilitating operations across borders and ensuring that, where programs do not exist to sustain these technologies, other means are brought to bear.

What are the main challenges for the defense industry in Afghanistan? The challenges are two-fold: First, we must respond very quickly to the demands of crisis operations. We have to allocate our best people to these tasks. This means redeploying resources which are not always automatically available, both when it comes to developing new equipment and updating legacy systems. We have to give these demands absolute priority internally. This is what we do in my own company and I am certain that the other major defense companies do the same. The defense industry is not just in business to make money-of course, we have to make money otherwise we cannot exist-but we are also part of a team effort. We have citizen values. I do want to emphasize this.

Second, there is an increasing need for outsourced services to support the front line, particularly in long-running peace support and crisis operations. Whether it be logistics-providing everything that the troops need on the ground and getting it there-satellite communications, or surveillance, more and more areas are seeing civilian contractors operating alongside the military in their direct support. It is important to choose the right targets for this approach, but when it is done right it means that the services which the military receives are of much better quality than they would otherwise be.

Outsourced services do a great deal to reduce overstretch on military forces. This is a very positive trend and I do not think there is any way around it. There was a time in NATO when some people thought it was too expensive compared with putting military forces on the ground to do these things. But the question is, how much do military forces really cost? Nobody actually knows their true cost. In contrast, it is straightforward to calculate the exact cost of outsourced services. In fact, outsourced services cost less in the short-term because they avoid the capital cost, and if managed correctly they are less expensive in the long-term as well.

As I mentioned earlier, I would like to see the importance of the defense industry and defense technology recognized in the Strategic Concept. NATO and the defense industry must find better ways to collaborate. We cannot keep this arm’s length approach. In many cases, we need to operate in integrated teams and also need to address the operational challenges together. It would be extremely beneficial to see a much wider acceptance in NATO of the idea of partnership with industry.

Let me give you some examples. In the defense planning area, which is now under the oversight of ACT, why not have an industry consultation and transparency panel inside the defense planning system? It is not a matter of security; we are all security-cleared. It is just a matter of getting a system put in place. It would help industry to be involved in this process, particularly as it becomes increasingly important.

In terms of managing and developing projects in NATO, why not have a consolidated NATO customer approach? I can tell you-and I am sure that other companies have had similar experiences-it is extremely frustrating to be dealing with overlapping NATO agencies. We have to first spend time trying to understand what the customer wants. After that, another agency comes along and says, “I am here to negotiate the contract with you,” and then, right at the end, SHAPE arrives and says, “Oh no, that is not what we wanted, you have not understood at all, let’s go back to the beginning again.” It is not possible to carry on like this. General Lather knows that when my company put the FOC+ sitcom system into the field, a major reason the project was so successful was that he chaired a regular meeting with all of the interests present and made sure that we were “one team, one mission” and it worked. I would like to see this approach used much more regularly in NATO.

In operations support, why isn’t there a mechanism for engaging industry directly in support of operational needs? Why can’t the commander come to some sort of industry forum and say, “Look, this is what we need. Who has got this? And if you don’t have it, step back and do not compete.” This is what happens in the UK. For example, the government sometimes calls certain companies to say, “Off the record, this one is not for you, it is for somebody else,” and those companies stay out of the competition. The need for rapid action often means that unconventional approaches must be allowed to go forward.

I would like to see a permanent network of industry battle labs, linked to ACT and NATO, to work on concept development and experimentation. There is no reason why we cannot do this. It would only require a small investment.

Finally, I imagine there is going to be a review of NATO’s acquisition process. It would be valuable to have this as a joint review with industry, i.e., industry representatives present inside a joint review. There are big questions to answer: Why don’t we have an acquisition agency in NATO? Every country has one. Why do we have to take every decision, no matter how small, to the infrastructure committee where 28 nations have got to agree, and where the politics come in and some of them say, “I am not saying ‘yes’ until I get more industrial return for my country”? While an acquisition agency in NATO may not be the right solution, the idea is certainly worth considering. These types of radical new approaches need to be looked at and I think industry is ready to support them.