How to “Reset the Matrix” of European-Atlantic Security

Ambassador Vladimir A. Chizhov
Russian Ambassador to the European Union 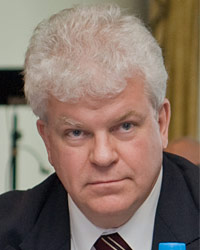 In today’s world, “Global Security in Times of Economic Uncertainty” is a rather equivocal title for a conference held. The current global economic and financial crisis can be rightfully considered a blessing in disguise for the security sphere. It vividly illustrates that we are living in a world of interconnection and interdependence, where no one is secure against the negative consequences that affect us on a global scale.

THE RESULTS OF A “FRAGMENTATION OF SECURITY”

What we face in these “times of turmoil,” 20 years after the end of the Cold War, is fragmentation of security, particularly in the Euro-Atlantic space. We have failed to establish a system of international mechanisms that adequately correspond to the new and evolving world realities, bringing together East and West, North, and South.

Ever since World War II, Europe has been a beacon of peace, stability, and cooperation for the rest of the world. Even at the height of Cold War rhetoric, countries situated on our continent and those closely connected with it managed to temper their ideological zeal and reach consensus on the Helsinki Final Act. It was then that Russia and Western Europe became linked with the increasingly famous network of oil and gas pipelines that have served everyone’s economic interests so well.

But can Europe claim it still remains that beacon of peace today? Certainly not. It is still haunted by ghosts of its Cold War past, and still unable to free itself from a bloc mentality and to overcome its lack of trust.

A real paradox lies in acknowledging the obvious failure of financial and economic instruments to prevent the current crisis and in insisting there is nothing substantially wrong with the system of Euro-Atlantic security. This system claims to be healthy, requiring only, if anything, some fine-tuning of EU-NATO interaction, the primary (or even the only) pillar of security in the Euro-Atlantic space. Russian concerns, meanwhile, can supposedly be addressed by explaining to Moscow the virtues of the present-day security architecture and by helping it to “accommodate” itself within that structure.

Alas, the real picture is substantially different. A series of events during the last few years—including the conflicts in the Balkans, the Kosovo Unilateral Declaration of Independence, the August 2009 catastrophe in the South Caucasus, the stagnation of confidence building and the CFE Treaty crisis, and ABM plans—confirm that Russian concerns are well- founded, to say the least.

As challenges become more global in nature, the answers that are offered are still limited in scope and suffering from Cold War era psychological constraints. Attempts to build a new Euro-Atlantic order exclusively on the basis of NATO, the EU, and the OSCE, each responsible for its own segment of security, are similar to the ancient cosmogonist theory that placed the Earth on the backs of three whales.

NATO centrism has led the Alliance toward a dangerous trap of perceived infallibility, yielding to the temptation of unilateral actions and lowering the threshold for the use of force. As a closed membership club created in a different era for totally different reasons, NATO is by definition unable to provide security for everyone in the 21st Century.

The EU is certainly less ambitious and less arrogant in that respect, focusing on “soft security.” But it is also a limited- membership union, increasingly reluctant to incorporate new members and taking up instead the policy of “near abroad,” renaming it the European Neighborhood Policy.

The OSCE, as designed by its founding fathers, was much better placed to play the role of a broad-based centerpiece of a Euro-Atlantic security architecture. But it was prevented from ever rising to the task. The OSCE Istanbul Summit in 1999 produced the Charter of European Security, but even that significant document was virtually forgotten overnight. The balance of the famous three baskets was refocused—and ultimately lost. As a result, a recent OSCE Ministerial Council failed to agree on a document because one delegation refused to accept references to the decalogue of the Helsinki Final Act. The OSCE never became a full-fledged international organization with adequate legal capacity, and a founding member’s capital suffered bomb attacks by other OSCE-participating states. A vivid confirmation of this point is the fact that the Vienna Confidence Building Measures (CBM) document was updated four times in the 1990s and never again since 1999.

The most perishable commodity in international affairs is confidence. It is best established on the basis of legally binding obligations, rather than vague political commitments or gentlemen’s agreements. This conclusion is based on hard facts: The commitments not to expand NATO eastward and to ratify the adopted CFE (just two examples) were never adhered to by members of the North Atlantic Alliance.

The issue at stake is how to revitalize confidence, prevent multiplication of dividing lines, be they on the ground, in political or military planning, or just in the minds of those involved in decisionmaking, and revitalize public opinion across the Euro-Atlantic space. By now it has become almost universally accepted that the world we live in is multipolar. It is high time to get rid of any Cold War remnants that affect the relations between players in the Euro-Atlantic area and to concentrate on common efforts to address global and regional challenges to security. In fact, the current financial-economic crisis may indeed serve as a positive incentive, stimulating not only concerted efforts to establish a healthier world financial and economic order, but also a more pragmatic approach to security, untainted by an outdated bloc mentality.

This pragmatic innovative thinking underpins the now well-known proposal by President Dmitry Medvedev to develop and ultimately conclude a new Treaty on European Security. Judging by initial reactions from various quarters, we believe that this proposal has come at an appropriate moment and has addressed outspoken or lingering concerns over deficiencies of the current security system. In spite of some reservations and objections, in general it has been received with genuine interest. I am sure that, whatever the political considerations of the moment, any serious and unbiased analyst would agree that there is no alternative to collective solutions for security problems and that there is no way to provide for one’s own security at the expense of the security of others.

The proposed treaty is intended to ensure that the principle of indivisibility of security is adhered to by all. In fact, we are not trying to invent any new principles of international behavior. The gist of the proposal is to transfer well-known and widely accepted political declarations into respective legal obligations.

We consider it prudent to, first, employ all relevant formats of political dialogue (including the OSCE, the Russia-EU political dialogue, the Russia-NATO Council, and bilateral contacts), and, second, to launch formal negotiations engaging all states in the broader Euro-Atlantic region as well as all international organizations active in the security field. And this is not just to show that we do not intend to sideline or undermine NATO or the EU. It reflects our belief that each of those organizations has indeed a role to perform in the new Euro-Atlantic security architecture.

ENABLING DIALOGUE TO “RESET THE MATRIX” OF EURO-ATLANTIC SECURITY

With all of the above in mind, we propose to convene in 2010 a pentalateral meeting of the OSCE, the Collective Security Treaty Organisation (CSTO), NATO, the EU, and CIS high-level representatives in order to compare their security strategies. The appropriate format for this will be provided by the Collective Security Platform, which, I remind you, was established 10 years ago in this city of Istanbul. In preparation for this meeting we are prepared for frank brainstorming discussions at the informal OSCE ministerial meeting in Corfu with the participating above-mentioned organizations. A dialogue on “resetting the matrix” of Euro-Atlantic security has in fact already been launched. We expect it to help all states and all security organizations within our common space agree on the way we should live and how we can ensure our security without posing risks and threats to the security of others.

Russia is ready for a wide-ranging and frank discussion. We invite our partners to put forward concrete ideas.