His Excellency Vasil Sikharulidze
Minister of Defense of Georgia 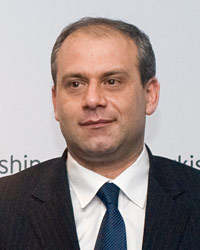 Our globalized world faces multifaceted security challenges ranging from weapons of mass destruction to transnational crime, terrorism, and everything in between. The challenges and complexities might seem insurmountable but the first step in solving problems is to recognize that they exist. Because recent events show that at least some of these challenges may be linked to traditional geopolitical gambits of aggressive states, please allow me to draw your attention again to the current security situation in Georgia. I apologize if I repeat certain points that have been already mentioned.

THE SITUATION IN GEORGIA

Today, the security situation in Georgia is tense. Russian armed forces occupy the Georgian territories of Abkhazia, the Tskhinvali region, the Akhalgori district, and the village of Perevi. Russian occupation forces deny the European Union Monitoring Mission (EUMM) access to the occupied territories, thwarting the EUMM mandate, which covers the entire Georgian territory. Recently Russia also vetoed the renewal of the U.N. Observer Mission in Georgia and the OSCE mission in Georgia.

Let me be clear: Russia is in complete violation of the six-point cease-fire agreement brokered by French President Sarkozy on August 12, 2008. Such behavior undermines the security of every country represented at this workshop. As democracy moves east, we need to pay attention to the dynamic security situation in a sort of swish that begins at the Baltic Sea, moves south through the Balkans, and pivots eastward at the Black Sea. Georgia stands at the pivot point of this swish.

TURNING THE ENERGY CORRIDOR INTO A COMMERCIAL AND SECURITY CORRIDOR

From that perspective, we now have the prospect of linking the Caspian Sea, the Eurasian heartland, Europe, and the North Atlantic in a single 21st Century zone of prosperity and democracy. The Black Sea region to which Georgia belongs is key to the security and stability of this zone. On the eastern shore of the Black Sea, Georgia is part of Europe and a gateway to and from Central Asia. It is a vital conduit for energy supplies from the Caspian Sea and from potential Central Asian suppliers beyond.

That corridor is usually referred to in the context of energy, particularly the Baku-Tbilisi-Ceyhan and South Caucasus natural gas pipelines. However, these energy conduits form the critical mass required to promote and sustain a broad east- west commercial corridor. With commerce come people, so this east-west corridor will also become a pathway for ideas, which is perhaps the most important prospect. Also, the strengthening and development of this energy corridor will greatly contribute to the energy security of the entire European continent. In the immediate term, this corridor is also vital as an alternative supply route to Afghanistan. All at once, a South Caucasus route offers another alternative and a chance for independent NATO diplomacy with the Central Asian countries.

GEORGIAN SUPPORT OF SECURITY AND PEACE

In the context of Afghanistan, I would like to emphasize that Georgia has opened its territory and facilities to the Alliance and offers all logistical support within its means. Moreover, following the serving of nearly 10,000 Georgian soldiers in different NATO and coalition-led peacekeeping operations, Georgia is set to rejoin ISAF. In autumn 2009, we will send a Georgian infantry company to Afghanistan and, in early 2010, we will send a Georgian battalion, with no caveats attached.

Despite our challenges, we are determined to do our part in support of world peace and stability. Although we face many threats, let us not forget that they are the consequence of a very positive development—after the Cold War, democracy spread eastward with remarkable celerity. The new democracies of Eastern Europe aspire to join Western institutions, not only for their own security and prosperity but also for shared values. This is the institutionalization of freedom, not a sinister plot to redraw lines on the map.

At this point I would like to recall the words of EU High Representative Javier Solana: “Security in Europe has schemes, has organizations, has structures that are working properly.” In this regard, membership in NATO remains a top Georgian policy priority, and we very much appreciate the Alliance’s commitment to us at the April 2008 Bucharest Summit, reiterated in April 2009 at the Strasbourg-Kehl Summit. Georgia is—and always will be—independent and democratic. Our security, as well as our stability, in the Black Sea and the Caucasus regions must not be seen as being in our interest alone, but also as being in the interest of all countries that champion peace and stability. Indeed, I would argue that a stable Black Sea and a functioning east-west corridor would bring peace, prosperity, and democratic development to all countries in the region.

In that spirit, Georgia remains steadfast in its commitment to strengthening its democracy, accomplishing its defense reform program, and contributing to international peacekeeping operations. If we stand up for our security today, we will build a brighter, more cooperative future for tomorrow.