The Middle East, Israel, and Palestine: A Brief Overview 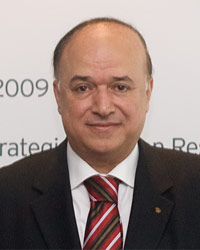 In some of the preceding workshops in Rome and Paris, we spoke of the transnational character of present-day challenges. We spoke of regional disputes developing into a breeding terrain for injustice and a culture of hatred and despair. We spoke of ethnic, religious, and intra-regional conflicts which led to wars by proxy, ethnic cleansing, and religious cleansing.

The Middle East region is torn by continuous attempts to incite wars between minorities and factions, between Christians, Jews, and Muslims, and between Shiites and Sunnis. A war of conflicting fatwas separates moderate Islam from those who use Islam to manipulate minds and commit actions in the name of Islam that the religion expressly forbids. Other actors work on exacerbating factionalism, deepening confrontation with the West, and spreading Europhobia while elements in the West are working to spread Islamophobia.

In our part of the developing third world, threat perceptions are incited by cliché moulding, resulting amongst other things in new policies such as constructive instability, democratic peace theory, regime change, pre-emptive strikes, and coercive reform. Hezbollah was checked in the elections that just ended in Lebanon. But how long will this remain the case? We will have elections in Palestine next year and in Egypt the year after. The recent election results in Iran are not meeting internal and external acclaim. Other actors in the region are waiting to see how this domestic dissatisfaction will unfold. One thing is certain, however: All of the parties are using the unresolved Palestinian conflict to advance parochial aims and selfish political needs.

ROLE OF THE U.S. AS A MEDIATOR

But we are now in a new era. Expectations run high as we feel that peace, justice, and international legitimacy shall return. U.S. President Barack Obama’s speech at Cairo University brought hope for a more assertive and even handed U.S. involvement and ushered in a new beginning with regards to the Islamic world. The U.S. has previously brokered peace between Egyptian President Anwar El Sadat and Israeli Prime Minister Menachem Begin at Camp David in 1978 and a permanent peace treaty between Egypt and Israel in 1979. It continued to mitigate successfully between Palestinian leader Yasser Arafat and then Israeli Prime Minister Yitzhak Rabin and also helped to improve relations with the Kingdom of Jordan. President Obama has underlined a two state solution in the Middle East and we all anticipate the assertive, catalytic, and peace-making role of the United States.